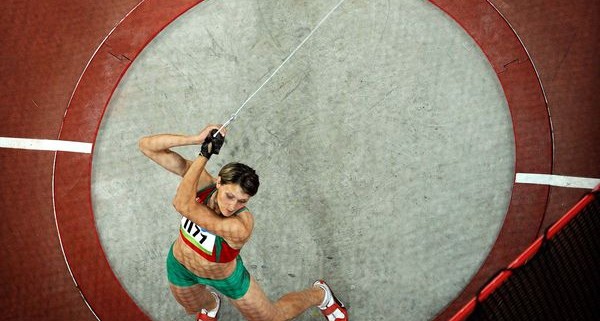 Question: What are some of the more important things that need to be done at the beginning of the throw in order to stay on balance during the throw?

The start of the throw is the most important part and I could talk about it for a long time. Instead, I’ll just focus my comments on one big issue that I’ve been working on: when to pick up the right foot on the first turn. This is also a pretty common problem among hammer throwers and one that has generated a lot of discussion throughout the years.

Normally, people fall into two camps in this debate. On one side there are those that emulate world record holder Yuri Sedych and try to lift the right foot off early. Biomechanist Ralph Otto showed us that on Sedych’s world record throw his right foot left the round on average at 63º (where 0º is the back of the circle and 90º is the left side of the circle). On the other side are those that follow Stewart Togher’s mantra “push to 180º.” My coach takes the middle road: he says that you shouldn’t try to pick the foot up early or late. Instead, the foot will come off the ground on its own when the body is balanced and you push the ball properly to the left side.