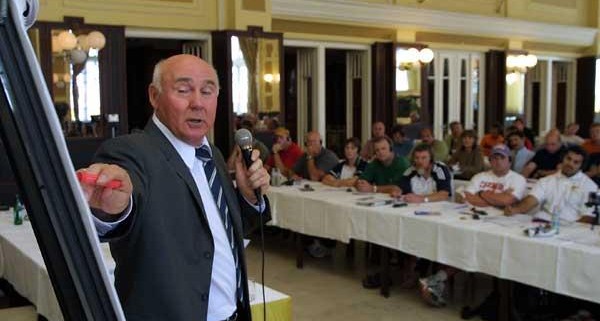 Not working much in the offseason gave me a chance to spend more time on this site and also work on a few projects that I’ve had on the shelf for years. One of those projects was to write a primer on Bondarchuk’s training. I originally wrote an article along those lines in 2004 after doing years of research, reading, and talking with other coaches about Bondarchuk’s ideas on training. However, as I was about to publish that article, I actually met Bondarchuk and it made me realize I still had a bit more to learn. Then I began law school and my free time vanished..

I still posted the original article on Hal’s Hammerthrow.com site, but I’ve wanted to update it with some new insight and finally had the time to do so this past winter. Thanks to some great feedback by my training partner Ryan Jensen, Zach Hazen, my girlfriend, and others, I was able to get the article published in the April edition of Modern Athlete and Coach. Modern Athlete and Coach is published by the Australian Track and Field Coaches Association. Their organization has done a lot for Bondarchuk (they published his first book in English) and I think they are perhaps the best athletics coaching magazine in the world. They are also very nice to work with and have been kind enough to let me republish the article here.