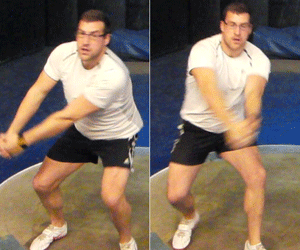 When I wrote about my training last month, things were going quite well. Distances were at an all time best, but my technique was mediocre. This month has seen the reverse. My results have declined, but my technique is progressing. This reversal often happens in my training and is one of the many paradoxes in the hammer throw. You would think that my best results would occur when I had the best technique, but it doesn’t always work that way. This time the cause of the apparent paradox is the intense special-strength oriented training program I began in November. I would complain about the crazy amount of volume, but I think Kibwé‘s new program has me beat. Nevertheless, my energy level has plummeted and my results have slowly gone with it.

Fixing technique can also be a paradox. Dr. Bondarchuk once told me about a former hammer thrower that had a bad habit of having a high point that was both too high and too early in the first turn. For four years, Dr. Bondarchuk would tell him to flatten out the entry and the athlete only made marginal success on that point. Finally, as the athlete was about to finish university and move, Dr. Bondarchuk had run out of ideas and told him to make his orbit even steeper. To everyone’s surprise, the throw actually flattened out. Bondarchuk had told him to emphasize everything wrong about the throw and he ended up doing everything right.