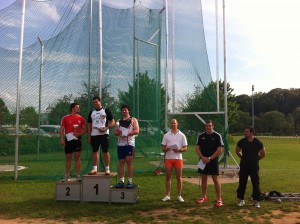 If you ever drive a manual car, I’m sure you’ve stalled it at least once at a stop light. You know the feeling of just sitting there, ready and waiting for the green signal to give you permission to start off. But as soon as it flashes you let out the clutch too early and stall the car. With others impatiently waiting behind you, you panic and try to restart the car as soon as possible. I think this accurately describes my first competition of the main season last weekend.

I elected to skip the famous Halle throwers meet last weekend and instead head towards tiny Luxembourg for the Memorial Kops Ludivig Reuter throwers meet. At Halle I would have had three throws and a quick exit, but in Luxembourg I was guaranteed six throws and was still part of a first class competition. Jerome Bortoluzzi’s winning mark of 75+ meters was nearly as far as the winning mark in Halle. Quentin Bigot, the 19-year-old rising star, took second and had a throw of over 76 meters right after the competition. Other throwers from France, Netherlands, Germany, and Switzerland rounded out a great field put together thanks to the hard work of Steve Tonizzo. He has extra motivation to ensure the hammer throw field is good; not only is he a hammer thrower, but the meet commemorates his old coach.