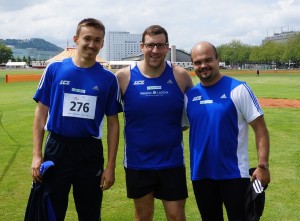 Let me start with the good news: I’m finally feeling healthy again. My rib has slowly reached a nearly pain free state thanks to help from my massage therapist and physiotherapist. The bad news is that this small problem set me back more than I thought it would.

I assumed I would return to the same level once I felt fit again since I hadn’t missed any training. My first chance to test this theory was on Saturday at the Swiss Club Championships in Bern. Back in 2010, my first year with LC Zürich, our club swept both the men’s and women’s titles for the 20th time in history. But last year was a different story after two clubs in Bern formed a partnership (and flew in some foreign athletes) to move up the podium. Stronger, healthier, and motivated to recapture our titles, LC Zürich kicked some ass this year, easily winning the women’s title and also coming from behind in the last event to win the men’s title. The Zurich hammer throwers placed first and third, tying for the most points by any club in one event at the entire meet.