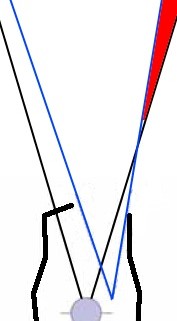 There are a few genuine treasure troves of coaching information available free online. The first is Hammer Notes, which I devoured when I was first learning the hammer. For better or worse, it remains a great way to survey the current theories of hammer training 30 years after its initial publication. The other is the free online archive of New Studies in Athletics, the IAAF’s official technical publication. In browsing it the other day I came across a 2001 analysis of the current IAAF hammer throw cage by a team of Japanese researchers including Olympic and world champion Koji Murofushi.

The hammer throw sector and cage has various changes over the past 60 century. The hammer throw was once thrown without a cage and with a 90 degree sector. Now it is thrown with an immense cage and a 34.92º sector. The new cage was introduced in 2004 and the sector in 2002. Both have been met with skepticism by athletes, cost complaints from clubs, and a warm welcome from risk managers.