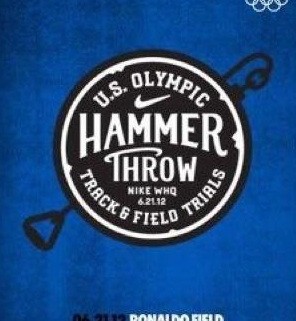 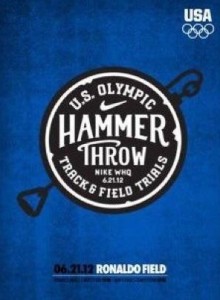 The Olympic Track and Field Team Trials kick off on Friday in Eugene, Oregon, but the action starts a day earlier and 111 miles north when the hammer throw final takes place on Thursday at the Nike World Headquarters in Beaverton. The decision to move the hammer away from the main event has stirred a bit of controversy since little was done to initially promote the event. Even within the last week there were three separate reports of Nike employees telling individuals and press that the event was not open to the general public. But a little controversy has been good as it pushed both the USATF and Nike to put out a last minute effort to publicize the event. A new hammer cage was recently installed at Ronaldo Field and bleachers will be coming soon. By all measures things are coming into shape just in time.

Whether or not you are in favor of the idea, there are some definite advantages to the format. The event will be broadcast live on regional television and a large turnout is also expected since the event is free and open to the public. More information for spectators, including parking, directions, and more, can be found on the Track Town 2012 website.

The biggest question on everyone’s mind is who will make the Olympic team. In the 100 meters, this question is easy to answer: the first three that cross the line will become Olympians. But in the hammer throw it is a bit more difficult since not all of the athletes have met the Olympic “A” qualifying standard. Currently only two men and three women hold the Olympic “A” standard in the hammer throw. If two more athletes with the “A” standard make the final, then they will all make the team no matter what spot they finish in. Essentially the only way for an athlete with just the Olympic “B” standard to make the Olympic team is if they win and only one of the “A” athletes makes the final. In this case, the US team will only have one member and the US Olympic Committee deems that the winner should go whether they have the “A” or “B” standard. The US Olympic Committee has released a more detailed explanation of the complete qualifying procedures and examples of the more complicated qualifying scenarios.

The qualifying window opened on 1 May 2011. Below is a list of athletes currently holding the Olympic “A” and “B” standards. Athletes may still meet qualifying standards with a throw at the Olympic Trials, but they will not be allowed to chase after the standards after Thursday.

Both the preliminary and final rounds will take place on Thursday, June 21. Two flights of 12 throwers will get three throws each. The athletes with the top nine marks will then proceed to a final where they will receive three more throws. The best results from all six rounds will be used to determine the final order of finish.

From 2004 to 2008, Kibwe Johnson and A.G. Kruger trained side by side every day under the guidance of four-time Olympian Jud Logan in small-town Ashland, Ohio. Now the two are facing off for the title of Olympic Trials champion. After Kruger’s win at the last Olympic Trials, Johnson headed to Canada, his wife’s homeland, to train under the guidance of former Olympic gold medalist and record holder Anatoliy Bondarchuk. The transition was rough. Kruger defended his national title in 2009 while Johnson finished last after fouling all of his attempts. But Johnson had a long-term strategy in mind and was already reworking his throw from the ground up. In 2010, he beat Kruger and took second place at the US Championships behind Jake Freeman. Then last year he crushed the competition, produced the fifth best mark in the world, and became the first American to break 80 meters since 2000. Johnson and Kruger are the only men with the Olympic “A” standard and both will qualify for London whether they place first or ninth. But pride is on the line.

This season has been off to a slow start for Johnson. He recently suffered his first loss to another American in nearly two years. He has also only competed sparingly since the addition of his newborn daughter to the family this spring. While his season’s best ranks just fourth in the US this year, he seems to be slowly rounding into form and more than capable of winning his first Olympic Trials. Other than Kruger’s massive one-off throw of 79.20 meters earlier this month, the field seems very close with Johnson, Kruger, Michael Mai, and Drew Loftin all throwing between 74 and 75 meters this year. Loftin had injuries earlier in the year, but quickly returned to form with a new personal best at the start of June and may be able to get close to the “A” standard with a few more weeks of training. Mai also has a history of reliable performances at big meets. Former world junior champion Conor McCullough is the youngest of those with either the “A” or “B” standard and may be looking for redemption after he was forced to withdraw from the NCAA championships this month for academic reasons.

It may seem that this would be a drama-free event as exactly three throwers have the “A” standard, but that is hardly the case as another three throwers are within a meter of the “A” standard. Jessica Cosby set a new American Record at the Pre Classic in early June. While she has split wins this year with the other contender Amber Campbell, she is always in form at the US championships and has won 3 of the last 4 US titles. Whether or not she wins, Campbell also looks set to make a top-three finish. Gwen Berry is the final thrower with the “A” standard, but is hardly a lock for third. Her training partner Jeneva McCall just won the NCAA title and made the US team for the World Championships last year. She could grab third but would need a nice PR to make the Olympic team. There are plenty of other contenders in this deep field; just look at the fact that both the 10th and 11th seeds (Britney Riley and Loree Smith made the Olympic team back in 2008.

The strength of the Southern Illinois University training group is a story that has often been overlooked. John Smith, the coach and husband of former Olympic shot put finalist Connie Price-Smith, trains three of the top ten seeded throwers and it looks like at least one will make the Olympic team. In addition to recent NCAA champion McCall, both Berry and Riley were SIU graduates who continue to train with Smith. Riley took a break from the sport after making the 2008 Olympic team, but returned to place second at the US indoor championships and is strong enough to have a breakthrough this week.

Another headline maker in the competition is Keelin Godsey, who is attempting to be the first transgender athlete to qualify for a US Olympic team. Her story has been the focus of features by Sports Illustrated and NPR over the past month. While not as controversial as the Caster Semenya issue from 2009 (Godsey is physiologically female, but identifies as a male), it is still an interesting story. Godsey is more than capable of repeating her third place finish at the 2011 US Championships this week. However the challenge will be to surpass the Olympic “A” standard. Without the standard, Godsey will not make the national team as was the case last year for the World Championships.