In normal years the hammer throw is already an event where you never fully know what to expect. This year it is even more so. Not only does the exclusion of the hammer throw from the Diamond League mean that the top names have rarely (if at all) faced each other this year, but three of the favorites have only competed in a combined four meets this year. This makes it incredibly hard to see how everyone stacks up and even more interesting to see how it all unfolds starting on Friday. Below you will find an overview of the competition format, profiles of the top athletes, start lists, 2012 performance lists, and predictions. I’ll also be traveling to London and hope to provide even more updates and a preview of the women’s competition in the coming week.

Over the past two years, 42 of the world’s best hammer throwers qualified to compete the Olympics. In order to qualify, throwers had to either achieve the Olympic B Standard of 74 meters or, if their country wanted to send more than one representative, reach the tougher Olympic A standard of 78 meters. Each country can send no more than three athletes. All 42 throwers will get three attempts on Friday morning. Anyone that breaks 78 meters will automatically qualify for Sunday evening’s final. In addition, if less than 12 throwers break 78 meters in the qualifying round then the next furthest qualifiers will move on in order to ensure a complete 12 person final. In the final each thrower receives three throws, with the top eight receiving three more after that. Only results from Sunday are counted when determining the final placings.

While nearly half the field has thrown over 78 meters this year, it is unlikely that such a throw will actually be required to make the finals. History has shown that the likelihood that all the throwers are in peak form is very small. At last year’s world championships 75.36 meters was enough to qualify for the finals. And as I concluded when analyzing the historic trends last year, it looks like 75 to 76 meters will again be good enough to qualify. In other words, nearly everyone in the field is capable of throwing far enough to make the finals. This is what makes the hammer throw so exciting. While 80 meters will likely be the magic number needed to medal, more than a handful of athletes are also capable of that.

Primož Kozmus (SLO)
Season Best: 77.35m (29th), Personal Best: 82.58 (2009)
Credentials: Defending Olympic champion; 2009 World Champion; 2011 World bronze medalist
If you were to have asked me to predict a favorite at the end of the last season, it would have been defending Olympic champion Primož Kozmus. The Olympic and world champion retired from the sport in 2009. After a season away, he returned and still managed to win the bronze medal at the world championships and break 80 meters again while still rusty. Surely, with another season of training he would return to his old form, right? But things haven’t gone smoothly for him so far this year. After just two competitions he has struggled to find his form and ditched his coach in June. He made his final preparations on his own and now somehow finds himself in the underdog role that he has been in at nearly every major championship. And at each of those championships he has over performed. Don’t count him out.

Krisztián Pars (HUN)
Season Best: 82.28m (2rd), Personal Best: 82.45 (2006)
Credentials: 2012 European Champion; 2011 World Championships runner-up; 4th place 2008 Olympics
Pars has a history of throwing well throughout the season, but coming up just short at the championships. Despite being the best and most consistent thrower in the world since 2008 he has not managed better than the silver he won at last year’s world championship. There are signs, however, that this might be his year. First off, he won his first major title at this year’s European Championships. While Primož Kozmus, Pawel Fajdek, and the Russians Ikonnikov, Zagorniy and Litvinov, all skipped the meet, he utterly dominated everyone else. And despite placing second last year, he was just inches short of the win on his last attempt. It’s not that he chokes, it is just that someone else often steps up. This year there are so many question marks surrounding his competitors that someone else might not step up and his consistency could finally benefit him. He has just one loss in ten competitions this year and is only inches off the best form of his life. 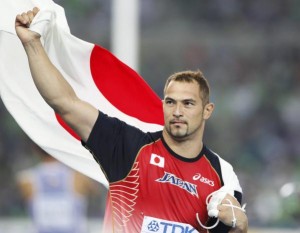 Koji Murofushi (JPN)
Season Best: 72.85m (81st), Personal Best: 84.86m (2003)
Credentials: 2004 Olympic Champion; 2011 World Champion
The defending world champion and 20004 Olympic champion is looking to not only winning his second gold, but also becoming the oldest Olympic champion in the history of the hammer throw. As is the case every year, it is difficult to tell what form Murofushi is entering the competition with. As is the case recently, Murofushi has competed sparingly. He has done just one meet this year with an extremely mediocre result of 72.85 meters. Last year he had just two competitions before winning the World Championship, but even both of those competitions were over 77 meters. While he won last year, he could need even further to win this year.

Ivan Tikhon (BLR)
Season Best: 82.81m (1st), Personal Best: 86.73m (2005)
Credentials: Olympic silver (2004) and bronze (2008) medalist; 2003, 2005, and 2007 World Champion
Speaking of competing sparingly, that brings us to the next big favorite. While Murofushi has competed just once this season, three-time world champion Ivan Tikhon has competed just once since the 2008 Olympics. Initially he was disqualified from Beijing for high testosterone levels, but after years of appeals he was able to get his medal returned to him after they found irregularities in the testing procedures. In June he made his return to the sport with the best mark in the world since 2008 and he has not competed since. Was it a fluke? Will he be able to back it up in London? Tikhon is one of the best throwers of this generation but has never come through at the Olympics. At age 36, this will be his last chance at gold. He has also never placed lower than fourth at the past three Olympics, and even then he had the same result as the bronze medalist but lost through a tiebreaker. Note: Tikhon was disqualified before the competition began after a retest of his drug test from the 2004 Olympics came back positive.

Pawel Fadjek (POL)
Season Best: 81.39m (3rd), Personal Best: 81.39m (2012)
Credentials: 2011 World Championship finalist; 2011 European U23 champion
Other than Pars, Fadjek is the only athlete to have broken 80 meters on several occasions this year. In addition, he is the only athlete that has beaten Pars this year. At just 22 years old last season he surprised many by winning the World University Games, European Under 23 Championships, and then becoming the youngest finalist at the World Championships. He has improved significantly again this year, but does he have enough to get up to the 82 meters that might be required for gold?

Kibwe Johnson (USA)
Season Best: 74.97m (56th), Personal Best: 80.31m (2011)
Credentials: 2011 Pan American Games champion
No American has made an Olympic final since Lance Deal’s silver medal performance at the 1996 games. Johnson is looking to not only do that, but also fight for a medal. He has not competed much since the birth of his daughter in April, but if he can return to last year’s form he will definitely be in contention. I may be biased since we share a coach, but it doesn’t hurt that he is guided by Anatoliy Bondarchuk, the most successful hammer throw coach in history.

Kirill Ikonnikov (RUS)
Season Best: 80.71m (5th), Personal Best: 80.71m (2012)
Credentials: 6th place 2011 World Championships
Ikonnikov placed sixth at last year’s world championships. Now he is throwing nearly two meters better and has placed no lower than second all season. He could be the most overlooked thrower in the field.

Pavel Kryvitski (BLR)
Season Best: 80.25m (6th), Personal Best: 80.67m (2011)
Credentials: 5th place 2011 World Championships
Kryvistski is a consistent performer and is coming off a strong performance at last year’s World Championships. However he has yet to break 79 meters outside of Belarus and that will definitely be needed to get on the podium.

Oleksiy Sokyrskyy (UKR)
Season Best: 78.91m (15th), Personal Best: 78.91m (2012)
Sokyrskyy hasn’t produced any draw dropping marks this year, but he has been one of the most consistent throwers on the circuit, producing good throws to consistently beat some good throwers. I don’t see him on the podium in London, but he could sneak up for a high finish.

As I mentioned above, nearly everyone in the field is capable of making the finals and placing high. What separates the athletes above from the rest of the field is that they have consistency. Take, for example, Lukas Melich (CZE). He has a top ten mark this year, but also has results ranging from 79.44m to 68.92m this year in 12 competitions. His average is right in the middle around 74 meters. If he throws 79, he is in contention, but he could just as easily fail to qualify for the finals. The same could be said of many other athletes in the field like Szymon Ziólkowski (POL), Oleksandr Dryhol (UKR), and young Quentin Bigot (FRA). Szymon Ziólkowski, the 2000 Olympic champion, is one of five finalists from that games in the field (others include Murofushi and Tikhon). Dryhol spent nearly twenty years away from the sport before returning recently. At age 46 he threw a personal best of 79.41 meters this year and is the oldest qualifier. Bigot is the youngest participant. At just 19 years of age he has already thrown 78.28 meters this year. Last but not least is Dilshod Nazarov. The consistent Tajikistani always seems to make his way into the final. He also doubles as the president of the Tajikistan athletic federation.

Below are some predictions and rankings from various sources. The All-Athletics world rankings are simply that, a ranking and not a prediction of who will place high in London. The rankings are calculated using a formula based on an athlete’s performances over the past year. Because they require 5 performances in the last year to be ranked, Tikhon and Murofushi are absent from the rankings. Athletics Weekly and Track and Field News are the two leading english language athletics magazines and their methodology is more subjective.