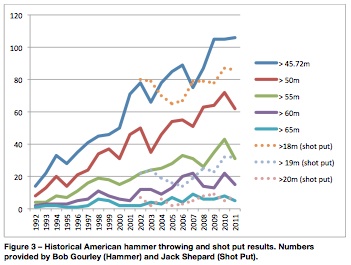 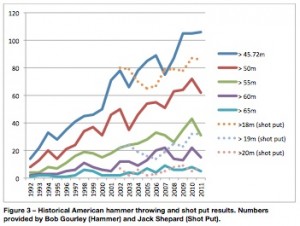 Here in Switzerland you can see first hand that the hammer throw has been declining over the past decade. Youth participation is so low that the hammer throw was cancelled at the national under-23 championships for lack of participation this year. But the problem isn’t isolated in Switzerland; neighboring Germany has seen youth hammer results in decline recently and what was once the strongest hammer throwing nation had results of 70 and 60 meters win medals at this years national senior men’s and women’s championships in the hammer throw. But while many countries are struggling, at least one has not just witnessed growth, but a growth level perhaps unmatched in history. That country is the United States.

Spearheaded by the efforts of Harold Connolly and many others in the mid-1990s, the number of US youth hammer throwers has increased fivefold at beginning and elite levels by almost every measure. This success is remarkable and something that other countries and other events can analyze when trying to replicate such success.

I was able to complete just this analysis thanks to the help of detailed statistics provided by Bob Gourley, Ian Tempest, Jack Shepard, and Swiss Athletics, as well all of youth coaches that completed my US Youth Hammer Throw Survey last spring. After looking at the situation in detail it is clear that the success has been attributable to: (1) increasing competitive opportunities for youth athletes; (2) keeping former throwers involved in the sport as coaches; and (3) providing resources for those coaches to learn more about the event. Countless other steps have also contributed to success, but these three stand out above all others. And all three steps are easy to replicate anywhere, yet the trend is heading in the other direction. In Switzerland the number of competitive opportunities and the number of athletes that become coaches is both shrinking. There is also little coordinated national education effort.

This article is still just a draft and I will revise it with your additional input. Therefore please post your comments below or email me with your thoughts on the reasons for such growth in America and how other countries can replicate that, or how America can continue its growth into the future.