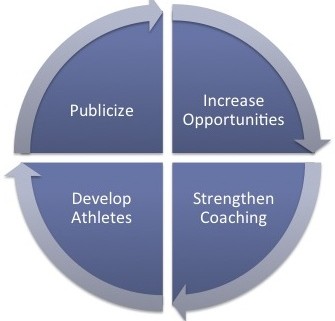 Sometimes the smallest moments can provide proof of what I have been thinking all along. Meet directors often like to say they have not included the hammer throw because it is not popular. But there is still a natural fascination with the event that they do not seem to get. My Sunday morning training this week took place at the same time as a kids’ relay practice. Throughout their training, I could tell many of the kids had their eyes on my throws instead of their coach, and as soon as they were done a handful ran over to the hammer cage. Without any prompting, they began to use their backpacks as hammers and then see who could throw the furthest with their impromptu technique. I posted a short video on Facebook. As you can see, the kids are naturally drawn to the event and have fun doing it. The same is true wherever I train. The hurdle the hammer throw faces is how to tap into this natural fascination in a larger and more systematic way.

The purpose of this post is to outline how I think the hammer throw can move forward and look for your input on how to streamline my various efforts and focus them in a more systematic way to address the needs of the sport. It doesn’t sound easy, and it’s not. That’s why I am asking for your feedback. 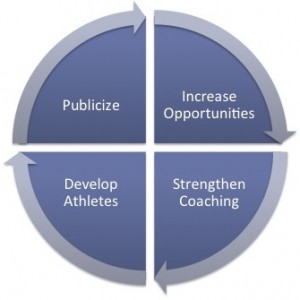 After reflecting on the success US youth hammer throwing has recently seen, I have been able to create a better template for recreating that success. I will be updating my case study to reflect this, but I would like to first summarize it here and ask for your feedback in creating an action plan that will help me consolidate my various efforts around this theme. The four main steps can be seen in the diagram to the right: (1) promotion; (2) increase opportunities; (3) strengthen coaching; and (4) develop athletes.

An Example of the Cycle at Work

This path has helped lead the the resurrection of US hammer throwing. The first step was publicity and this was helped tremendously by the rise of the internet, which made it easier to communicate with small groups of throwers across the country and also reach new audiences. Among the many individuals helping in this regard, Bob Gourley’s national rankings e-mail list is frequently cited as a key factor along with HSHammer.com. Once people became interested in the event, they needed a place to compete. Clubs and coaches around the country, like Throw1Deep, began to organize competitions. Harold Connolly also successfully lobbied USATF to add the hammer throw as a Junior Olympic event, bringing competition opportunities to nearly every state. With all these new coaches, it was also important that they have good guidance. Again, Harold Connolly developed free coaching manuals and invited the country’s top coaches to an educational course at the Olympic Training Center each summer. He, along with many others also organized camps and clinics all over the country to help train coaches and athletes. Finally, with more athletes and better coaching, the last step was to make sure the athletes had access to the resources they needed to develop into better throwers. Here, Harold was again instrumental in mentoring athletes like Conor McCullough and Walter Henning. He also set up the youth hammer grant program which provided financial support to youth hammer throwers.

The cycle then repeats itself because once these athletes were developed and began to have international success, it just created more publicity for the event and helped it spread even further. This also works at the elite level. Promoting the event and increase competitive opportunities increase an elite thrower’s value to potential sponsors. They then need good coaching and a strong support network to develop them further.

One thing you notice with my examples is that the driving force behind the movement is not the IAAF, USATF, or any other governing body. It is the coaches, throwers, parents, and fans. While attending the annual Swiss Athletics conference earlier this month they unveiled a new high performance plan. While this plan is an improvement, it continues to focus on individuals rather than events by looking at talent, potential and performance. But by not targeting specific events that could have an impact, neglected events will continue to underperform. As I told the president of Swiss Athletics, their system has no way to identify someone’s potential for the hammer throw when they have never tried it and therefore the hammer will never get help. One of my athletes won the Swiss under-16 title last year after just a half-dozen training sessions. No one would have identified her as a hammer throw talent since she had no results to measure until this summer. And it was only with luck that I was around and helped show her the event. There may be 100 others like her in Switzerland, but we will never know if there is no effort to improve the event. If we wait for the federations to support the event, we will never move forward. We have to gain momentum ourselves.

Thankfully, many individuals worldwide are hard at work improving all four elements of the cycle. However we are working independently and this often results in a lack of direction. Even my own efforts often lack direction and are divided. My projects are even divided into sub-projects. For example, the Evergreen Athletic Fund I founded in 2008 operates more than a half dozen websites. In addition, lack of coordination results in many tasks that are needlessly repeated while others are neglected. I would like to combine my efforts better so that it would create a more cohesive project that would reduce the administrative tasks and also provide a better platform for applying for grants, donations, or other funding that might be available.

Currently I easily spend 10-20 hours a week on my various hammer throw projects. This is in addition to my other time commitments: my own training, coaching, work, and most importantly my understanding wife. I have not received a penny for my work over the past decade organizing these and, in addition to time, I have spent a lot of money out of pocket on these pursuits. I will continue these efforts, but it is not a long-term sustainable solution. Therefore, I would love to hear your feedback on the following topics:

As I mentioned earlier, I am spread a little thin right now. I decided to try and write down all the different hammer throw tasks I am doing outside of my own training. The list is long and I have reprinted it below in case it helps you get a sense of why I need to give better focus to this project. The majority of my work is through the Evergreen Athletic Fund, but much of EAF, including this site, are outside of it. Take a look below for details. I also have the help of many others with most of these tasks. For the Evergreen Athletic Fund, the board and my parents have been very helpful. Will Conwell was also essential in our fundraising. Bob Gourley dedicates endless time to putting together the stats for HSHammer.com and other work with the USATF Foundation grants. My club, my coaches, and so many others have provided support to everything I have worked on.

In addition, I am not alone in my efforts. Many athletics blogs and websites have helped provide publicity to the hammer in recent years. Kathrin Klaas is one of many people working hard to increase opportunities and get the hammer throw into the Diamond League. The numerous clinics and seminars worldwide attest to those dedicated to educating coaches. Around the world, coaches and groups like the NYAC and the USATF Foundation are also trying to make sure athletes have the resources they need to throw further. There are thousands of others who I don’t even have the time to name but dedicate hours every week to the hammer. If I can get your help looking at what we all are doing, and developing a better way to help, then the hammer throw can only get better. For example, one shortcoming I have found is that no organization or person I know is working on recruiting coaches to the sport. Perhaps this should be a focus, perhaps not. But your input on such topics is appreciated. Post below is preferred so that it can help spur an open discussion, but also feel free contact me via email or phone.