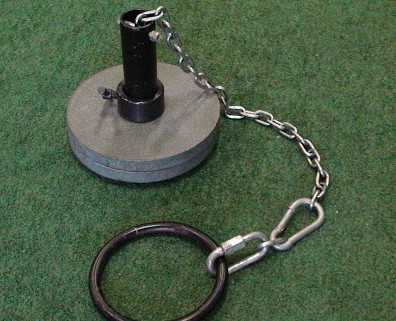 A favorite topic of mine is special strength, the bridge between throwing and lifting. The point of special strength is to improve your throwing through exercises that closely mimic the movements and muscles used in the hammer throw. I have already outlined some of the classic exercises, like plate twists or kettlebell releases. But I am always looking for new exercises since the body frequently needs something new in order to shock the system and get it to adapt to new, higher levels.

Finding a new exercise can be a difficult task. On the one hand you want to try something different. In this area, a coach’s imagination is their only limitation. But on the other hand you don’t want to try anything so different that it strays too far away from the hammer throw, or whatever event you are training for. Here, too much imagination can hurt you. It may look cool to start doing one legged twists on a bosu ball, but you’ve also moved so far away from the hammer that the exercise likely has little transfer to the real throw.

One exercise that is often overlooked are heavy winds, perhaps because the idea is too simple. The exercise is just like it sounds, wind something heavy. Nothing complex about it. This will help develop hammer throw muscles in the winding movement. I highlighted this exercise back in 2009 with a video of Beijing Olympic champion Primož Kozmus doing this exercise in training (shown to the right).

After trying to make a similar device on my own I was finally able to something that I did not fear breaking thanks to Sorinex, an innovative strength equipment manufacturer. I highly recommend it. They have been producing the Ballistica training tool for several years now. Sorinex has the hammer throw in mind: former NCAA All-American and 72-meter thrower Bert Sorin is the company’s Vice-President and his father is the founder and President. The Ballistica has an adjustable length and a variety of setups that allow it to be used not only for heavy winds, but for release, as a discus throwing tool, or for several other exercises. Their website has a video describing and showing the different functions, so I thought I would just show how I use it in my own training.