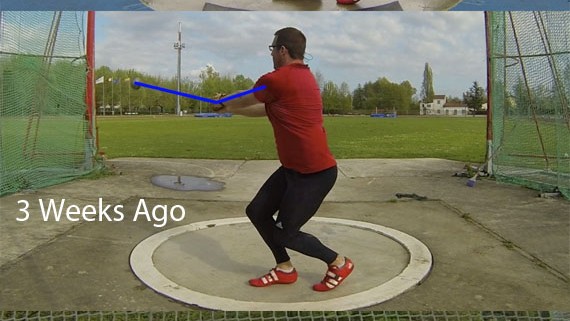 Another week and another unplanned competition added to my schedule. This time I went to Olten yesterday for their season opening all-comers meet. I’ve had good luck in Olten the last few years and it continued yesterday afternoon as I launched a big season’s best of 65.27 meters and then got to watch two of the girls I coach also throw personal bests.

I followed up a decent result in Basel last week with a week full of season training bests from the 10-kilogram to the 7.26-kilogram hammer. I knew I was ready to throw in another meet. My technique did not quite hold up in Basel, but after the competition I knew I was ready for 65 meters this month. In Olten I also had the technique and, not surprisingly, my result was again over 65 meters. Other than one throw I abandoned, all throws were solid, stabile, and legal. I gradually built up in each round until my best throw arrived on my also attempt. I’ve included a video of that throw below.