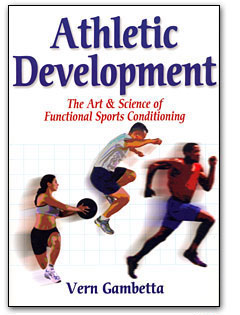 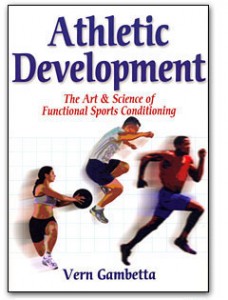 I have signed a contract with Human Kinetics to write a new book tentatively titled “Developing Athletes.” In many ways it is a follow-up and update on Athletic Development – The Art & Science of Functional Sports Conditioning. The goal is to take a long hard hard look at the theory and practice of long term athlete development. I intend to seperate fact from fiction and look closely at model programs that have successfully developed athletes with an emphasis on why. It is going to be a big job; I plan on starting writing in earnest as soon as I return from GAIN. It should be published in late 2014. Any ideas or input you might have would be appreciated. The following is the introduction book that I wrote in my book proposal.

Ever since I started on this journey first as an athlete and then as a coach I was fascinated with what it took to develop and nurture the athlete. As a young athlete I saw some athletes develop and thrive and others stagnate and fall by the wayside. Why was this? I noticed that certain schools were always good in selected sports. I noticed that certain coaches, regardless of talent, year in and year out always produced top athletes and teams. Why was that? At that stage of the journey I must admit it was all somewhat mysterious to me, there did not seem to be a method behind what I was observing. I wanted to know why the things that I was seeing were occurring.

Those questions started me on a quest; some would call it an odyssey to find answers. I knew that there had to be more to it than I was seeing and experiencing. When I began coaching I noticed the same things I had seen as an athlete. Some athletes thrived, some just barely survived and many fell by the wayside. Now that my perspective was broader not only did I see schools continue to develop talent but also nations. It quickly became clear that athletic excellence was something that could be systematically nurtured and developed. So I began to look around the US and then around the world, I started looking for big things, commonalities; just like everyone I was trying to find the secret. I quickly realized there was and is no secret. I did start to see patterns and common threads though. Little did I know that I was working in a system that was doing exactly what I was searching elsewhere for. I literally could not see the forest for the trees, the answer was right in front of me.

When I started coaching and teaching in 1969 that was probably the apogee of sport development in the United States. We were the preeminent sporting nation in the world as evidenced by the dominant performances at the 1968 Olympic games. There was mandatory daily physical education taught by trained educators. Sport was centered in the schools and coached by trained coaches. Sport at all levels was part of the educational system. In the elementary and junior high schools there were afterschool sports programs that featured participation over winning. By the mid to late 1970’s all this began to unravel. Mandatory Kindergarten through twelfth grade daily physical education was dropped. Physical education as an academic discipline in colleges and universities was deemed not academic enough and physical education programs were dropped or the curriculum was changed to sport or exercise science. The mission of training physical education teachers and coaches was severely compromised.

All of this coincided with the ascendency of the GDR and the Soviet Union in the 1960’s and their dominating performances in the 1976 and 1980 Olympic games. They began to beat the US in sports were we had traditionally been strong. So we started looking at what they were doing and tried to copy it. This was somewhat of a knee jerk reaction. What we failed to take into account as we blindly copied their system was the cradle to grave control they had over their athletes due to the communist system. Frankly the methods and ideas those countries used became an infatuation for many. Little did we know that our system, what some people derisively called a non-system as it had existed was probably superior. It would take the fall of the wall and the decline of the eastern bloc for us to understand that their system was not everything it was made out to be.

I write all of this to set the stage for the goal of this book. It is quite straight forward – to define the process of developing athletes and in parallel coaches development from the beginning stages to the podium and beyond because it is my contention that the two must go hand in glove. It is a journey, a process, not a clearly defined model as many would like to portray it. There are landmarks that must be achieved along the way but there are not definite time parameters; it is not a straight line. The athlete and coach are part of the socio-cultural milieu so they reflect the society they exist in. There are many realities today that face the developing athlete that were not a factor forty or fifty years ago. I will take a historical look at the various athlete development systems to see what we can learn from them. I will then outline a process of athlete development designed to meet the current reality of sport in the 21st century and all the challenges that are entailed. It is a dynamic process that requires continual learning. Thanks for joining me in this journey as we learn together to develop the best athletes and coaches possible.