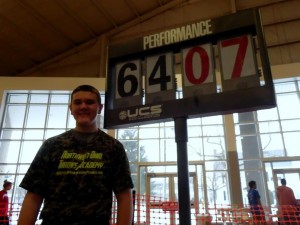 Nick Lane after setting the a new national freshman class record on Friday.

Freshman Nick Lane (Bowling Green) broke the national freshman class indoor weight throw record on Friday. Competing at the Oiler High School Invited hosted by the University of Findlay, Lane launched a throw of 19.69m (64’07.50″). Not only did this add nearly two and a half feet to his personal best, but it was a new national record, breaking the two year old mark set by Kenneth Brinson (Marist, Atlanta, GA). Brinson threw 19.61m (64’04.00″) in March 2012 at the New Balance Indoor Nationals meet. With Lane’s mark coming early in the season, he will have even more chances to improve the mark further.

Lane was interviewed by MileSplit earlier this week and talked about the record and his goals for the season.