Track and field and bobsled have ties that go back a long ways. The bobsled requires a fast and explosive start, something that sprinters, throwers, jumpers, and hurdlers all possess. I highlighted some of the track stars entered in the men’s bobsled earlier in the week. And while the women’s bobsled is a relatively new sport added to the Olympics in only 2002, it has also quickly developed a connection to athletics. This year the US team has a very strong contingent of track athletes on the women’s bobsled team. Former summer Olympians Lolo Jones and Lauryn Williams have been making most of the headlines, but they are not alone. Five of the six women on the US team have track backgrounds. Brakemen Aja Evans is profiled along with Jones and Williams below, but USA 2 pilot Jamie Greubel also competed in the heptathlon for Cornell and USA 3 pilot Jazmine Fenlator was a thrower at Rider University. Overall track and field is the most popular background for athletes, with well over a third of competitors from all countries coming from the sport.

The women’s bobsled competition will take place Tuesday, February 18th and Wednesday, February 19th. Twenty sleds from 13 countries will be competing. Unlike the World Cup circuit, where results are decided after two runs, the Olympic champion is determined by adding up the results of four runs. Below are 11 of the women’s competitors that have already reached an international level in track and field, in a rough ranking of their success off the ice. With two world champions, three Olympic medalists, and four World Championship medalists, these are athletes at the highest level. And as I mentioned earlier, they are just a few of the track and field athletes that will be competing in Sochi. 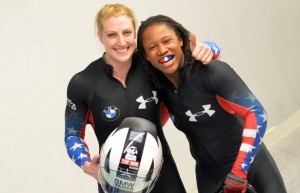 Jamie Greubel and Lauryn Williams have a great shot at a medal and both were former track standouts.

Lauryn Williams (USA 2), World Rank: 3
Sprint sensation Lauryn Williams has a chance to be fifth athlete and third woman to win a medal at both the summer and winter Olympics. As a brakeman in USA 2, she enters the Olympics ranked third in the world. She has already paired with her pilot, Greubel, several times on the World Cup circuit this year. At the last top in Austria they won and they also finished second together earlier in the season. In the summer Olympics she struck silver in the 100 meters at age 20 back in 2004. The next season she was world champion. With a personal best of 10.88 seconds, she was also a two-time world champion in the 4×100-meter relay, world championship runner-up in the 100 meters, three-time Olympian, and four-time World Championships competitor. Most importantly, she has an Olympic gold medal after running in the prelims of the 4×100 meters at the 2012 Olympics.
Update: Team USA made some changes in their lineup and shifted Williams to the USA 1 sled with pilot Elena Myers. As Myers is currently ranked second in the world, this further improves her medal chances and could make her the first woman ever to win gold at both the summer and winter Olympics.

Jana Pittman (AUS), World Rank: 18
Pittman has a resume just as impressive as Williams, however her medals chances will be slim in Sochi as Australia is far from a bobsled powerhouse. Pittman is a two-time world champion in the 400-meter hurdles with a personal best of 53.22 seconds. She also has a best Olympic finish of fifth.

Lolo Jones (USA 3), World Rank: 7
While she has the most name recognition of anyone competing in the bobsled, she has just the third best track credentials of those that have switched over to sliding. Still, there is a reason everyone knows her name. With a personal best of 12.43 seconds in the hurdles, she is a two-time Olympian and two-time World Championships competitor. Indoors she was also a two-time world champion over the 60-meter hurdles. Her best Olympic finish was fourth at the London games, however in 2008 she was ranked first in the world by Track and Field News and was leading the Olympic final before stumbling at the end of the race. In Bobsled Jones was on the podium already this year with other pilots on the World Cup circuit, but her chances of repeating that are less in Sochi since she will be in USA 3 and pilot Jazmine Fenlator. Their best finish together on the World Cup circuit this year was seventh but in a close race anything is possible.

Hanna Mariën (BEL), World Rank: 10
Mariën was a 200 meter specialist and holds the Belgian 200 meter indoor record. Her outdoor personal bests in the sprints are 22.68 seconds and 11.41 seconds over the 100 meters. In addition to making the European Championships semifinals over 200 meters, she competed extensively on the Belgian relay squad, earning a silver medal at the 2008 Olympics, bronze at the 2007 World Championships, as well as numerous other international appearances.

Judith Vis (NED), World Rank: 9
As a former 100m hurdler and heptathlete, Vis won four national titles. She also also competed at the 2003 World Championships in the former event after posting a personal best of 13.05 seconds.

Aja Evans (USA 1), World Rank: 2
Evans never qualified for a World Championship of Olympic team, but she was a standout shot putter and sprinter at the University of Illinois. That combination showed her great combination of speed and power which got her on the USA 1 sled. He best results were in the shot put, where she competed for the US and won bronze at the North American, Central American and Caribbean (NACAC) Championships. She was also a five-time NCAA All-American and had a best was 17.08 meters (56’0.5″). In the bobsled she has already been on the World Cup podium five times this season. She has also been in bobsled longer than Williams and Evans, which gives her a bit more experience. Another interesting fact is that her brother is seven-year NFL veteran lineman Fred Evans of the Minnesota Vikings.
Update: As mentioned above, Lauryn Williams was moved to the USA 1 sled. As a result, Evans was bumped down to USA 2. However her podium chances are not changed that much since USA 2 pilot Jamie Greubel is also ranked third in the world.

Rebekah Wilson (GBR), World Rank: 13
Wilson is quite young and only left athletics recently, but in 2010 she competed as a member of the UK sprint relay team at the 2010 World Junior Championships.

Andreea Grecu (ROU), World Rank: 26
Even younger than Wilson, Grecu competed in the 100 meters at the 2011 World Youth Championships.

As I said earlier in the week, brakemen tend to bring the better athletic backgrounds to the table, but a few pilots have also had elite track careers. Competing under her maiden name, Fyodorova, the Russian driver Olga Stulneva was an Olympic and World Championship medalist in the 4×100 meter relay. With personal bests 11.21 seconds in the 100 meters and 23.19 seconds in the 200 meters, Stulneva was able to contribute to the Russian relay squad that finished second in the Athens Olympics and third at the 2005 World Championships. She also competed in the open 100 meters at the 2005 World Championships.

Sergeyeva was an impressive heptathlete before starting bobsled. She placed third at the 2009 European Under-23 Championships and had a best of 6118 points.