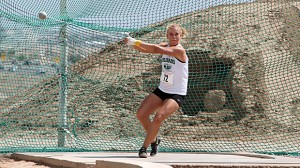 Haley Showalter (Valor Christian, Highlands Ranch, CO) made her season debut with the standard 4-kilogram hammer and already grabbed the national lead. Showalter won the CSM Last Chance Qualifier on Saturday with a mark of 183’2″. She had three additional legal throws that all landed over 181’8″.

Unfortunately the mark was submitted too late to be included in Bob Gourley’s weekly national performance list posted this morning, but barring an improvement by one of the competitors (two other girls have broken 180 so far this year) she will be first on the list next week.