America is normally a powerhouse in the men’s shot put, but this year it is even more so than normal. Seven of the top eight throwers in the world this season are American and six have thrown more than seventy feet (21.34 meters). The only one of the bunch that has not broken the barrier is world indoor champion and defending national champion Ryan Whiting, who has withdrawn due to a recently removed abscess. But even in his absence the field is strong and packed together.

Christian Cantwell has had the top season so far. After being out with injury most of last season, the 33 year old started this year with four solid wins. He also has the world leading mark. However a disappointing result in the last Diamond League shows that how open the competition will be. Cantwell placed just seventh and the win went to Joe Kovacs. Reese Hoffa also won the Prefontaine Classic and Kurt Roberts just threw a personal best a week ago and made his first national team indoors. Young Jordan Clarke is also in form, while NCAA champion Ryan Crouser has also scratched likely due to a foot injury he suffered on his last throw two weeks ago.

To summarize, anyone could win. But if you look at throwers who have taken home wins already this year, it will a battle between veterans Cantwell and Hoffa, and the next generation in Kovacs and Roberts. And the best part of it all is that the event will be showcased in front of a excited crowd on the steps of the state capitol.

The hammer throw and other throwing events will also be held outside the side, but simply on an back field rather than as a showcase. It is a shame since the action will exciting. The last two years Chris Cralle has been the surprise runner-up at the national championships. But after a few years in the shadow this might be his year. He lodged his first win against A.G. Kruger this year with a personal best of 75.26 meters at the Tucson Classic. And he returned a few days later to do it again. Kruger, on the other hand, is still the American leader of 76.25 meters from March. However he has not been as solid in May and June. Olympic Trials champion Kibwe Johnson is also hoping to redeem his fifth place finish from a year ago. After a slow start to the season he is perhaps the hottest this month after having just beaten Cralle at the inaugural Ben Plunknett Invitational. Andy Fryman is also close to joining the big three with a personal best of 73.90 from last month. 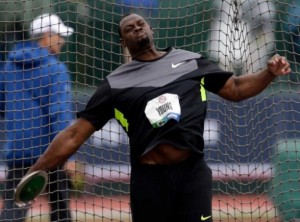 HMMR Media’s Jason Young is a favorite in the men’s discus.

If any event looks like it is on the verge of a changing of the guard, it is the men’s discus. Five of the top seven men in the country this season were born after 1990. Just writing that makes me feel old. The best of the old guard will be Jason Young, who has not competed much this year but still boasts a best of 64.36 meters. The top collegians all come form the Southeastern Conference. Kentucky’s Andrew Evans and Tennessee’s Tavis Bailey have the top two marks in America, but Alabama’s Hayden Reed was the surprise winner at the NCAA Championships two weeks ago. In between in age is 26 year old Jared Schuurmans. While he is a bit older than the youngest throwers, he is relatively new to the sport, as I described in my profile of small school throwers last season. His personal best of 64.42 meters is one of the top marks and he has also shown solid consistency this year. You also cannot count out two-time defending champion Lance Brooks despite a very slow start to the season.

I am not a javelin expert and these guys are making it hard on me this year. The best preview of the national championship took place at the Tucson Elite meet last month where all of the top throwers showed up to fight for the sole spot at the Prefontaine Classic allocated to an American. The results were strong and deep, with Sam Humphreys taking the win with a season’s best of 81.51 meters. Humphreys, who placed second at nationals last year, there is one of the favorites. But just one spot behind him in Tucson was US leader Tim Glover who launched a throw of 84.01 meters earlier this year. Cyrus Hostetler and Sean Furey are also both over 80 meters this year. Hostetler has thrown further, but Furey has been quite consistent despite placing only seventh in Tucson. Defending champion Riley Dolezal literally came out of nowhere last year with a nine meter personal best to win. This year he has proven it was no fluke with a win at Mt. SAC, third place finish in Tucson and every meet over 78 meters.