It’s less than a week until the US Championships begin in Sacramento. With no world championship to qualify for this year, some big names might be missing from other events. But for throwers it is business as usual. All of the top American throwers will be there. Even without a spot on Team USA up for grabs, they will be fighting for bragging rights, bonuses, and personal bests.

The women’s shot put will be the first event at the US championships. Held on the steps of the California state capitol building, it will also be one of the meet’s featured events. The big name here is Michelle Carter. Carter placed fifth at this year’s World Indoor Championships, fourth at the outdoor World Championships last year, and is the only person to have given Valerie Adams a scare recently with a close second place finish at the recent New York Diamond League meeting. She has not lost to an American since the 2012 Olympic Trials and that is unlikely to change next week since her normal rival, Jill Camarena-Williams, is out for the season on maternity leave.

But the fight for the podium will still be tough. Felisha Johnson, Brittany Smith, and Tia Brooks are packed together after Carter in the rankings. Brooks and Johnson have split a pair of meetings this outdoor season. Smith has not faced her rivals this year, but did get a big mark to win in Tucson last month. World Championships competitor Jeneva McCall also hasn’t found her shot put form yet outdoors, but is a factor having thrown over 19 meters last year. 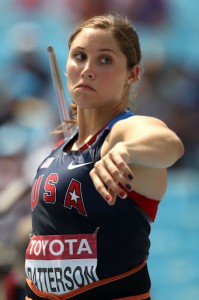 Kara Patterson will be looking for her first US title since 2011 after overing some injuries.

After several injury plagued years, Kara Patterson is back. The American record holder has slowly gained momentum and confidence this season and just last week threw a new season’s best of 62.47 meters to place fourth at the New York Diamond League meet. That mark also makes her the clear favorite to win in Sacramento. While no other throwers have broken 60 meters yet this season, two throwers have made big marks to approach the barrier. Leigh Petranoff has improved her best by nearly four meters to 58.37 meters. And University of Florida junior Fawn Miller tossed 58.17 meters to win the NCAA title earlier this month, nearly six meters better than her best before 2014. Miller’s last three meets were all over 57 meters, showing a consistency that is hard to come by in the javelin. You also cannot count out Brittany Borman who threw season’s bests the last two years to win at nationals and qualify for Team USA.

After setting her American record of 75.73 meters at last year’s US Championships, Amanda Bingson has emerged as the front of a pack of strong American hammer throwers. So far this year she has again thrown an impressive 75.12 meters. But while she is the favorite, her victory is far from secure. Five women have broken 73 meters last year and all are in contention. Jeneva McCall showed great promise at the end of last season, but along with training partner Gwen Berry has not been quite as sharp in 2014. Jessica Cosby, on the other hand, just barely missed making the World Championships team last year and has returned this year with a personal best of 74.20 meters. She enters the meet with the second best mark of the group. Amber Campbell has also had a very consistent season. If I had to bet I would say it is Bingson, Cosby, and Campbell, but this will be so close only a stupid man would actually lay money down.

Experience matters in the discus. After years stuck at a national level, Gia Lewis-Smallwood finally rose to the international level a few years ago. Last season she placed fifth at the World Championships and this year she has continued her strong streak at the age of 35 with a throw podium finishes at the last two Diamond League meets and a season’s best of 65.77 meters. As with the shot put, the defending champion might not have much competition here.

2012 NCAA discus champion Whitney Ashley has come of age this year by breaking throwing over her old personal best five times so far this year. In 11 competitions she has only lost to another American twice. Another thrower having a breakthrough year is high school record holder Shelbi Vaughan. After making the Olympic Trials finals as a high schooler, she struggled in her first year as a two-sport athlete for Texas A&M. But this year she added more than three meters to her best and captured the NCAA title. Having faced the top professional throwers little this year, she is a big wildcard. Another six throwers have season’s bests over 59 meters, meaning that even a slight improvement by any one of them will push them onto the podium.