This season was supposed to be a down year with no global championship, but no one got the memo. A world record, area records, and more highlighted the 2014 season. My men’s and women’s rankings took a look at the top performers, but there were many more moments to remember. Here is my list of the biggest hammer throwing stories of 2014. 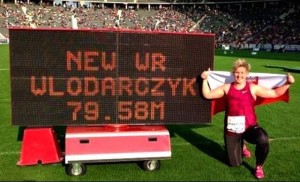 1. World Record – After a strong European Championships we knew it was just a matter of time and in late August Anita Wlodarczyk broke the world record with a throw of 79.58 meters Berlin. While the IAAF didn’t even name her an athlete of the year finalist for this accomplishment, she finally got some recognition last week as Track and Field News named her its athlete of the year. And she deserved it. With an average throw of 78.15 meters in the competition and a sector foul at the European Championships supposedly measuring 80.35 meters, the 80 meter barrier is even closer to falling.

2. A Sunny European Championship Final – Sun was shining for the men and the scene was set for action. After two fouls in qualifying, Krisztian Pars was not a big fan of the ring, but he came out firing in the final and took the early lead. But it was back and forth throughout. Pawel Fajdek grabbed the lead in round two before Pars hit a home run in round three and passed the field by nearly four meters. This mark would hold up for the win, but not without challenges. Fajdek came within six inches in round five, and Pars responded by throwing a national record. Sergej Litvinov also moved from sixth to third in the fifth round in a tight battle for bronze. Overall no one was safe and the competition provided thrills until the end. 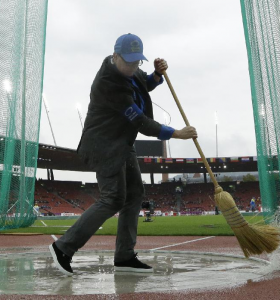 3. A Rainy European Championship Final – There was both rain and shine in Zurich and for the money it was lots and lots of rain that provided drama of a different fashion. The psychological drama played out before everyone’s eyes as throwers either stepped up or folded beginning in the warm ups. World record holder Betty Heidler was never a factor, for example. With two fouls, world letter Anita Wlodarczyk also looked to be out of it before nearly breaking the meet record in round three to secure the win already. In the meantime Heidler, Martina Hrašnová, Joanna Fiodorow, and Kathrin Klaas had to push it to the limit in a wet ring to battle it out for the remaining medals. The rain may not have been fun for the competitors, but it was fun to watch the action unfold. And it continued to the end as Wlodarczyk threw a sector foul over the world record on her last attempt.

4. Heidler Will Continue – After an up and down season which saw the lose of her world record, it was unclear if Heidler would continue. Already in 2013 she declared she would no longer compete at the World Championships after failing to make the final in Moscow. But she put the rumors to rest and confirmed she is committed to train until 2016 and will compete at next year’s World Championships after all.

5. Juniors Reign in Eugene – The IAAF World Junior Championships has been since 1986, but not once has an athlete been able to defend their title until this season. Ashraf Amgad Elseify of Qatar shattered the world record at the meet two years ago. While he was unable to better that mark in Eugene this year, he won his second title in a row.
To celebrate he did 12 backflips down the backstretch. While not record setting, the women’s competition was also close and won by Ukraine’s Al’ona Shamotina.

6. Field Events Under Threat – The year was not just full of positive news. For example Quentin Bigot and Zhang Wenxiu were caught up in doping affaris. But for me the worst news of the year is that top officials keep discussing contracting our sport and potentially eliminating events. Diamond League Vice-Chairman Patrick Magyar continues to suggest that events should be cut from track and field. After changes to the Olympic program were announced last month, rumors were also abound that some events would be cut from the Olympics. As of now all the rumors have been denied, but it seems no one is secure in the current environment. 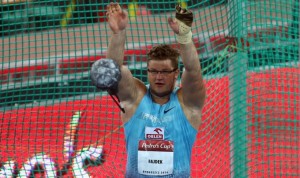 7. Weight Throw Comes to Europe – We definitely need to work to better present the field events. Some think eliminating our events will make our sport more attractive. But others, myself included, think adding events will help more. In speaking recently with Jüri Tamm, himself a 25 meter weight thrower, he agreed and others are already working to make this happen. This year saw the weight throw featured at a major Polish indoor meet. Hopefully we will see more of that in the future. Poland has actually been quite innovate with the sport; indoor hammer throw records were also unofficially set when they hosted a meet at the covered national football stadium in August.

8. New Standards for the Hammer – In November the IAAF announced new qualifying standards for the World Championships. Rather than the old A and B standard system, a single standard will be used in the future. And after years of suffocatingly high standards, they are beginning to return to earth for the men’s hammer. What will the impact be? As Kibwé wrote about, it could mean the first US men’s team with three hammer throwers in decades.

9. Morning Finals in Rio – The IAAF also announced the competition schedule for the 2016 Olympics with one major change: morning finals for many events including the women’s hammer.

10. Sultana is Back – The queen has returned. While many throwers had great years, Sultana Frizell’s resurgence makes the list as we used to be roommates and I couldn’t be happier to see her again among the world’s best after a coaching change and family difficulties over the past two seasons. Her new best tied the North American record. Along with co-record holder Amanda Bingson North America now has two legitimate medal contenders heading into the next World Championships and Olympics.