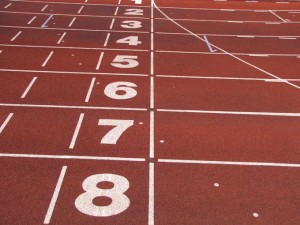 The new website Lane9 takes a look at the personalities behind track and field.

In some ways, the formula to grow our sport is simple. To get broader exposure we need stars. To get stars we need athletes with personalities. And then we need to have a venue to showcase those personalities.

But this is easier said than done. One of the few chances we get to hear from athletes currently is during the post-race interview when they are out of breath, sweaty, and at a loss for words. What often comes out is a mix of sports cliches: “I gave it my all”, “It just wasn’t there today”, etc.

You would think the internet would help with this task, but so far there has been little change. Rather than watching one post-race interview online, now you can view hundreds on Flotrack. Many more meets are available streaming, but the commentary is non-existent or poor especially for the field events. Athlete blogs often don’t fill the gap either. But the potential is there to use the internet to create a deeper connection with fans. The few athletes that blog effectively do so because they let their personality out. As a result they have quickly built a large following and new sponsors, such as Lauren Fleshman has done. She is a great runner, yet has not been at an elite level since 2011 due to the birth of her child. But despite this she now has a Runner’s World column, new sponsors, and has a larger following than ever. Fans know her, she is interesting, and they want to be behind her even if she is not yet back in form to make Team USA.

But the media coverage also has to improve and treat the sport and its stars like a professional sport and give them a chance to shine (although the media is hardly perfect in major professional sports as they often can get lazy with their coverage there too). Superficial coverage of the sport will not help it grow. Jesse Squire and Kevin Sully over at the Daily Relay are doing an outstanding job by providing in-depth commentary on the sport which puts the athlete’s performances in perspective. But there is still a gap in getting to know the athletes themselves. Here’s where a new website, Lane9.co, steps in:

As a new venture that started up last month, they have been regularly posting about both stars and more obscure athletes in our sport that provide a good look at the personalities behind the performances. I hope they keep it up as so far there have been some great posts: