I thought the IAAF was moving in the right direction after they released the new World Championships qualifying structure in November. As Kibwé wrote about last fall, the World Championship standards looked like they could help resurrect the hammer in America. They were tough, but gave athletes leaving college an achievable goal so that they would continue with the sport. But that honeymoon was short-lived. This week the IAAF announced the qualifying standards for the 2016 Olympics and the sport as a whole has taken a giant step backwards.

Bring the Best to the Starting Line

We can debate about whether large or small fields are better for the sport, but I think everyone would agree that you should at least have all potential medalists at the starting line. If you are missing some contenders, how is it truly the Olympics?

The biggest problem with the new standards is that they will do just that: leave potential field event medalists at home. If you don’t believe me, just think about this for a second: 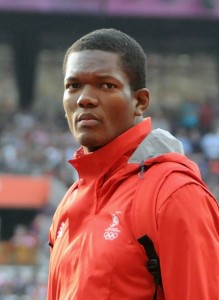 2012 Olympic Champion Keshorn Walcott wouldn’t have even qualified had the standards been as high as they are now.

If the qualifying standard been so high in 2012, Olympic javelin champion Keshorn Walcott might not have been in London at all.*

Walcott had thrown just 82.83 meters before the Games, under the new Olympic standard, and then improved two meters in London to take the gold.

If you look at more stats it gets even crazier. First of all, the javelin standard is now 83 meters when merely 84.58m won gold in London. The hammer throw standard is 78 meters while 74 meters qualified for the final in London and 75 regularly makes the final at a major championship. In fact, there has never been a major championship where it took 78 meters to even make the final. It’s the same in the other throws. And the jumps. Almost across the board the standards reach historic highs. Plus there is no back-door B Standard that athletes can use to qualifying. The result is that many potential medalists and finalists will be watching the Olympics from home.

The cool website TrackStats has a great comparison of the 2013 to 2015 standards. Even without the 2016 standards included you can get the picture. In the men’s discus just 10 throwers met the standard. But in the 100 meters 70 athletes reached the standard. So what did the IAAF do? They made the discus standard tougher and the 100 meter standard weaker. If you can explain that logic to me hopefully you are heading to the Middle East to sort out the conflicts there next.

This sucks for the athletes, but it also hurts the sport. Walcott was one of the big stories of the games after winning gold at age 19 from a country with no throwing tradition in an event that favors experience. We are losing out as a sport if we leave these people at home. And the gold medal loses a little of its luster with it. Just look at men’s soccer where the Olympics have basically become a glorified junior tournament. The same thing happened in baseball and now the sport is gone from the Olympics.

The Short-Term Effects of Unrealistic Standards

In addition to hurting athletes and fans, the biggest short-term effect of such unrealistic standards is an increase in cheating. We saw this in 2013 when the standard for the hammer was 79 meters. Doping, long implements, light implements, you name it. Where there is a will, there’s a way and athletes will find a way to reach a standard if it is not realistic to reach through their own efforts. I wrote about this in 2013 and with the Olympics on the line the stakes are even higher.Promotes cheating.

The Long-Term Effects of Unrealistic Standards

If standards stay this high, the field events will slowly die off. Some in our sport might see that as a good thing, but we lose the diversity which makes our sport unique. And I’m not just making loud statements. If you look at it, things can go downhill fast. High standards mean more athletes will give up the sport before reaching their peak. High standards mean less Olympians that can help motivate the next generation. High standards means less funding for field event athletes, as many federations and sponsors base their funding on qualifying for teams.

* Update: Bob Hersh, IAAF Senior Vice President, has pointed out that Walcott would have indeed qualified. Under the full IAAF qualifying procedures, which have not yet been fully released, athletes without the standard will be allowed to qualify if the minimum field size is not met. The minimum field size has also not been finalized. So it is hard to evaluate with certainty that this would be the case.

Also complicating the matter is that the waiting list is often ignored as a qualifying method by many countries. Most major countries elect not to send athletes that do not meet the official standard. The result last summer was a decreased field size in nearly every field event and just 16 participants in the women’s shot put. It is hard to think things would be much different as most major countries, the US being an exception, only allowed athletes to compete in the Olympics with the A standard under the old procedures. B standard athletes were ignored. Federations tend to defer to the IAAF in defining what is good without looking at these small details. I doubt things will change for the 2016 Olympics.

But what remains unchanged by this fact is the effect of higher standards on sponsors, funding, cheating, and all other aspects outlined above is unchanged by the waiting list. High standards are still hurting our sport even if Walcott maybe might have had a chance to qualify anyway.