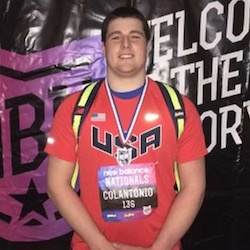 Ukraine’s Hlib Piskunov dominated the competition from start to finish in the hammer throw finals at the World Youth Championships. Piskunov already secured the win with a first round championship record, but then moved the mark again in the second round to not only set a new record, but also improve his personal best. His winning effort of 84.91 meters also places him fourth on the all-time list for the youth age group. His countryman Mykhailo Havryliuk took silver, also with a personal best. And Ned Weatherly of Australia captured bronze.

Also taking place Friday was the qualifying round of the girl’s hammer throw. While no Americans met the entry standard for the meet, Canada sent a strong team with two throwers having broken 62 meters with the international 3-kilogram hammer this year. Complete results are on the IAAF webpage. Melissa Coquillas of France threw a personal best and was the top qualifier with 66.75 meters. Canada’s Lindsey Frederiksen missed the finals by one spot in 13th. Her teammate Chanell Botsis placed 16th. The girl’s hammer throw final will take place Saturday afternoon.