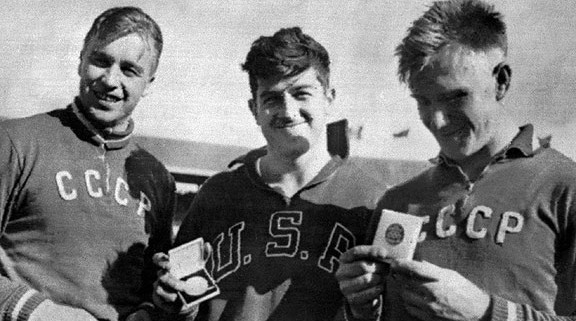 When I first met Harold Connolly I was not in a good place. I had just turned 18, was starting my senior year of high school, and while my friends were picking out colleges to attend, I had trouble just motivating myself to get out of bed in the morning. I was fat, lazy, depressed and directionless. It’s hard to believe, but I weighed over 300 pounds and was failing all of my classes. Thankfully in walked Harold.

→ Related Content: We write an annual remembrance of Harold Connolly and his contributions to our sport. Check out our other posts here.

Harold Connolly knew the power of sport in life as it is what powered his life. He lived his life as if he had something to prove. And he did have something to prove. First off, there was the fact that he was an Irish-American raised in humble circumstances in Brighton, Massachusetts. But the real motivation revolved around his perceived physical limitations: due to a complication during birth, Connolly’s left arm was four inches shorter than his right and had severely limited mobility. Individuals with disabilities were not treated with dignity back then. What drove Harold was the quest to be treated normally. As he wrote in his unpublished memoirs, “I couldn’t stand to be treated differently.” The fact that he excelled in the classroom and in life were not enough, he wanted to prove himself physically. He told the Washington Post in 1988:

“I had to prove my value on the playing field. That was my motivation: give me a chance and I’ll show you.”

He tried many sports, even hiding his disability to be allowed on his high school football team. Part way through college, he stumbled upon the hammer throw. It was the hammer throw that unlocked everything for him. In three years he went from being an athletic nonentity to being Olympic champion. The hammer throw drove his life from that point on. Speaking about his quest to make a fifth Olympic team, Connolly wrote that the hammer throw defined him as a person:

“I couldn’t let go of the activity that seemed to define my life. The hammer throw was responsible for my sense of self-esteem and accomplishment.”

That is how Harold knew about the power of sport. He never did let go of the sport. Sure, it knocked him down a few times, but he simply got right back up and worked even harder.

Even after he finished throwing he dedicated the rest of his life to spreading the power of sport to others. First as a coach, then as the executive director of Special Olympics where he advocated for the power of sport for those with intellectual disabilities, and later in life as a promoter of youth hammer throwing. This is how we became friends.

I got the chance to first meet Harold when he came to Seattle to speak at a conference. My family lucked out with the chance to host him for the weekend. The whole time there was an aura that followed him around. He moved and spoke with such confidence that when he told you that you could do something, you knew it was possible. After all, he had done it himself.

My life changed after that weekend. I started to put everything in order to become a better thrower. Within one year I had lost 80 pounds. While I had to sit by as my friends graduated high school without me, I was able to complete the requisite courses a few months later and move on to college. What I learned that weekend was the power of sport and it gave me direction. I had found something that motivated me and keeps driving me forward every day nearly 15 years later.

Harold passed away five years ago. But even now he continues to show athletes the power of sport. A great statute of him stands in Boston with the purpose being “to inspire young people to overcome difficulties and achieve success.” And the youth grant program he founded 10 years ago is still going strong and serving to inspire a new generation of throwers. Due to funding issues the future of the program is uncertain, but even if just one more life is touched by our event it can make a world of difference. The world can really be changed one hammer at a time.

→ Help keep the grant program alive by making a tax deductible donation to the USATF Foundation. Contact us for details. Donations will go directly to the hammer throw project and help change lives through the hammer, just as the event turned around Harold’s life and my life.