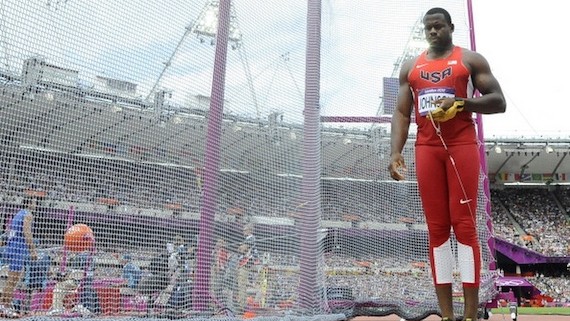 I just got back from the World Championships and put a few thoughts together on my experience there for Throwholics yesterday. You can also read it below. For some of my thoughts heading into the championships you can also check out my last post.

→ Check out more lessons learned from Beijing including what Vern Gambetta sees as the secret behind Ashton Eaton’s world record and why you shouldn’t foul your first throw.

Reflections on yet another “could have been” global championship . . .

I’ve been home with my family and very pregnant wife now for a few days. Glad I made it back in time to be with her as we’re down to the final days before we finally meet #2. She’s doing very well, we’re just playing the waiting game.

My stepmother used to say: “shoulda shot a duck, don’t make no soup“. It’s so true. I don’t mind calling Beijing like it is: a failure. No need to sugar coat it. Don’t beat around the bush. That’s the easy way out and does no one any favors, especially the athlete. Even though there were a couple crap seasons for me before this year, the one thing that has continued to remain constant through good and bad year, is our ability to produce at least a season best at championships. Not making the final in Beijing did not once enter my mind. So no, I am not happy about it. We were aggressive in my programming going into Beijing and I knew I’d either do exactly what my training predicted, or not. We went all or nothing, I believe our aggressiveness peaked me a couple days too early. Very unfortunate.

I am most disappointing because I predicted how the championships were going to go. I said the field wasn’t as strong as it appeared on paper and that 78m would most likely get a medal. After throwing a few centimeters shy of 77m at US Champs, my goal was 78m in Beijing and to put myself in position to earn a spot on the stand.

The consolation could not be any smaller, but I am training through our annual Kamloops Throws Fest and hope for a season best at the end of September. If I can reach the 78m that I wanted in Beijing, that would be even better! Ending the year on a good note will be important as I head into Rio preparations. All that matters is what you do at the global events, and taken even further, what you do at the Olympics. A good result next year in Rio will make the failure of Beijing a distant memory.

The positives to be taken are this season was my best since 2011. Every result over 75m (until Beijing). This year, and especially the last five weeks, I’ve registered training results that I haven’t seen since early-2012. This all bodes well as I get ready for Rio. This season reminds me of 2010. Another season I had all results over 75m with a season best and personal best of 77.07m and training personal best of 78.40 (which is still my Kamloops training personal best). I am looking forward to another year of training.

The 2016 Olympic Trials should be a fun show in Eugene and I plan on at least competing through Rio. Brazil has been very good to me in my career. There are still a couple goals that I moved to Kamloops with, that I have yet to accomplish. I mean, if I’m only going to earn one global medal in my career before I retire, I might as well do it at the Olympics, right?