We pumped out a lot of great information here in HMMR Media over the past year. With more than 450 new posts, we covered a wide range of topics. We also added new four new authors that bring world-class experience: Vern Gambetta, Craig Pickering, Derek Evely and Benn Harradine.

It is hard to narrow down our favorite posts of the year, but below I’ve tried to put together a handful of links in different categories like training talks, training methods, sports science, throwing technique, and the new HMMR Media Podcast. We have highlighted just a fraction of those below, but you can browse the rest in the archive section of each blog. A HMMR Media membership is required to read many of the articles in our archive, so if you haven’t joined yet it would be a perfect way to start the new year.

→ Related Content: Check out our top training posts from 2013 and 2014 for a curated look at even more great training articles.

This year was a busy year for training talks, as I got to sit down with a number of coaches from a variety of sports.

Early in the year Derek Evely put together a great multi-part series on traditional and modern approaches to periodization. I also added a piece on the evolution of periodization. By comparing and contrasting different approaches he does a good job of helping coaches evaluate what can work for them.

A few of my favorite articles explored some new topics this year, such as the antifragile athlete and my own take on velocity-based training. I also put together a good summary of Bondarchuk’s views on long term athlete development.

Jason Young had several interesting posts combining his experience as an athlete and coach. My favorites were his look at why athletes need to relax, restore, and retreat, talent vs. potential, situational practice, as well as his look at the 5 secrets of strength. 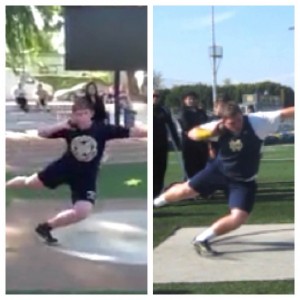 Nick’s case study is an article I keep coming back to this year.

Nick Garcia‘s most popular post was a case study on the Bondarchuk method. In it, Nick shows how the method actually addresses many points that people feel it overlooks. He also contributed his thoughts on progressing developing athletes, as well as numerous good rants on the state of track and field.

And, as always, Vern Gambetta was our most frequent contributor. He added some insightful posts on some of his influences such as Gerald Mach and Eddie Jones, and just last week listed his books of the year. He also provided engaging posts on several core elements of training such as athleticism, work capacity, and strength training. As well as more controversial postisions on topics like olympic lifting and data collection. Most recently he had some great musings on priorities in training, athletic excellence, and coaching excellence.

The training talk with John Kiely provided a great scientific background about periodization, but that was not all we had on the topic this year. Craig Pickering put together some great posts, including a 4-part series on understanding science of coaches. Craig also explored individual topics like ice baths and post-injury nutrition. We’re glad to have him on board.

My book on hammer throwing, The Ball and Chain was released this spring and provides some great information about technique. We also put together some great content on this site about how to stay low in the hammer, lengthening double support, and the low point.

Dr. Bondarchuk also released a great new book on throwing technique himself, which I discussed here. Kibwé wrote about the weight throw and technique. And Nicola Vizzoni even added some comments on 3-turn throwing.

We launched the HMMR Media Podcast back in April and have already put together 30 episodes. Rather than trying to cover a handful things superficially, we instead try to focus on one topic each week and have a conversation exchange ideas and experience. We’ve put together a complete archive that includes a list of our favorite episodes by topic. The most popular episodes of the year were our interviews with Bryan Mann on velocity based training, Matt Jordan on training speed, and Buddy Morris on evaluating different training options. I loved these episodes, but my favorites of the year were our episodes on admitting mistakes, our chat on mental toughness with Kibwé Johnson, and most recently our discussion on training as an older over 30 with Benn Harradine.

Thanks again to our sponsor PUSH for helping make the podcast possible. We already have some great new guests lined up for next year, so please subscribe now to get the latest episodes.