Regardless what sport we work with it is often our goal as coaches to try and determine athlete readiness for competitions. Many of us coaches understand that in a sport like track and field there will be meets and possibly many meets where our athletes will not be at peak performance or even ready to throw a respectable distance in comparison to their personal bests. This is normally planned for because the ultimate goal is to throw far, jump high, and run fast at the big meets like the conference championships, regionals, and finals. Planning like this can be called periodization or as Coach Gambetta refers to it as planned performance training.

When working with teams rather then individuals, training can be and in my opinion has to be planned for in a vastly different way. Many times in a team environment the results of the pre-season and in-season will determine if you have an opportunity to move on to the bigger competitions like regionals or finals. If the in-season is not successful then the chances of the team continuing on into the post-season become very low. Taking all this into consideration how do you go about determining your teams readiness for the season and for that matter week-to-week during the season?

Currently Catapult has some technology that tracks many different metrics of training for individual athletes that may be on a team. A few of these metrics use GPS to track total mileage as well as overall running patterns. I am the first to admit that I am no expert on Catapult as I do not own any and have not used one. However I do believe it is a great tool if you have the budget to apply it. Unfortunately at the high school level this was not an option during our football season.

Therefore, I had to come up with a way to determine if our training on and off the field was helping or hurting our performance on Friday nights. Then it came to me. For a long while now I have used bar velocity devices such as the PUSH band (disclosure: PUSH has sponsored our podcast) as secondary proof that I was in peak performance. I did this by comparing my daily throwing results with bar velocity when I lifted. When my throws were up my speeds were up. When my throws were down so were the speeds. Furthermore, when I reached peak performance my throws were always up as well as my bar speed. The patterns mimicked each other perfectly.

→ For more on the use of bar velocity as a tracker of sport form listen to Episode 15 of the HMMR Podcast or read Martin’s overview of his experience.

I realized I could use a similar approach. As an individual I was mostly interested in confirming my plan was on track. But with the team needing to be ready every week, I could use the feedback to give me a status of their game-readiness and make adjustment accordingly.

Bryan Mann has written extensively on using bar velocity as a way to train. He has listed some specific numbers that he considers to be called “speed-strength” that I used as a starting point. For example he wrote that speed-strength in the squat or bench is found when moving the bar between .8m/s to 1.0m/s average velocity. 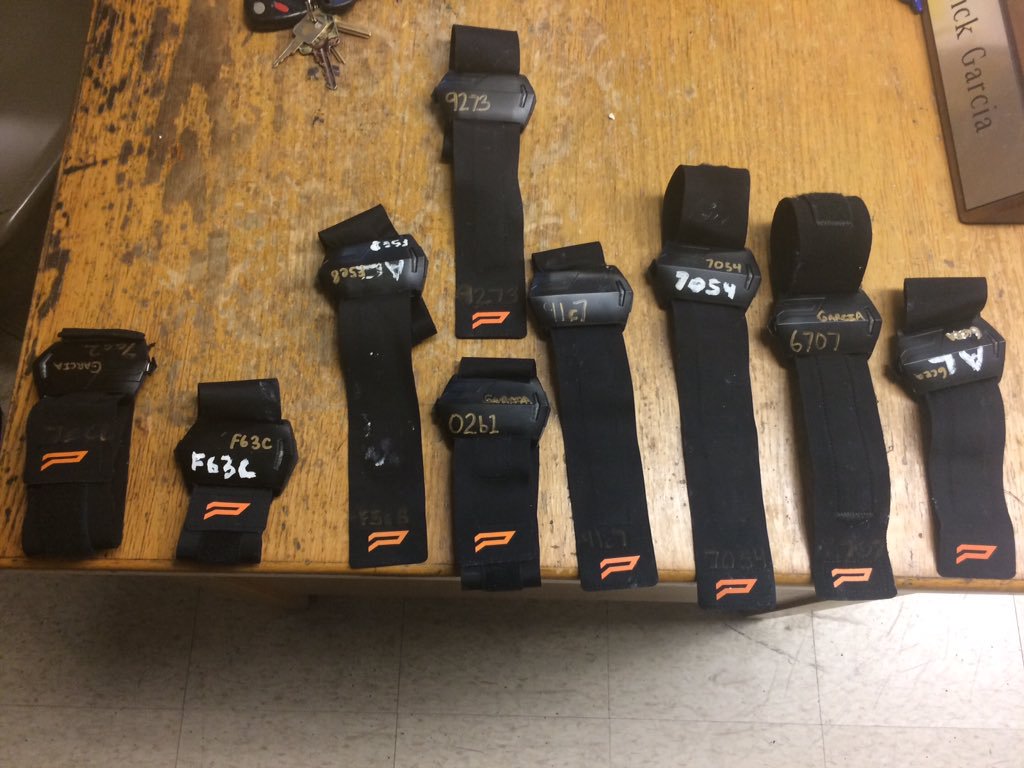 During the pre-season I chose one athlete from each position to represent the different duties on the field: defensive back, linebacker, defensive lineman, offensive lineman, running back, and wide receiver. I also included 2 athletes who may not play much and don’t get as many reps during practice. The idea was to hold our first training session using this philosophy one week before the first game. Therefore, we were producing speeds that I considered realistic since they were not completely fresh. I felt doing it this way would be more representative of the speeds we may see during season based on fatigue from everyday normal practice.

I took each of the selected players and had them establish weights to be used for the hang clean, squat, and bench based on Mann’s literature: average velocities 1.35 m/s for hang clean, and .8-1.0 m/s for squat and bench. Throughout the year we would continue to use these same weights week in and week out while charting the speeds of each set of each lift in order to track the athlete’s readiness.

As expected the athletes who played a majority of the plays had a decline in average velocity by the time the middle of the season came. The players who were not playing much kept within the speed parameters since they had not accumulated weeks of playing fatigue. When moving into the middle of the season it is increasingly important that a team is feeling as good as possible to ensure a late season run.

The data I was able to gather can help us as coaches determine how to attack the last half of the season. Do you need to back off or can we go a little harder each day? In our case we needed to back off of what we were doing week in and week out. Our speeds were down each week and showing no signs of getting better. This didn’t just mean backing off weights, but reevaluating the entire training load on and off the field. However, having the data that proves you need to do something different and actually having the higher ups to change something are two different things. Common sense may say if you are being unsuccessful at something the answer is to work harder. However in reality the best answer is to back off and be fresh enough to perform the way you were coached to perform. I don’t have the answer on how to get the higher ups to do something different but I wanted to shed some light on a possible way to determine your team’s readiness throughout the season. Thanks for reading.


Learn more about the PUSH Band, a simple and affordable armband that can track your velocity and power output on hundreds of weight lifting and training exercises.