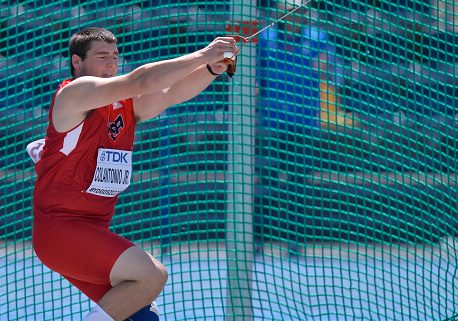 With two Americans in the final, many eyes were on last night’s hammer throw competition. National high school champion Bobby Colantonio (Barrington, RI) was the first American to throw, but struggled to find his rhythm after a first round foul. He would finish the competition in 12th place. Adam Kelly started off strong and built upon that. Kelly, a national champion while at Barrington High School in Rhode Island, just finished his freshman year at Princeton University. Throwing last in the order, he launched his third attempt out to 73.17 meters, a new personal best and the sixth best junior mark in American history. Under a new format, after the first three throws the field was cut down to just six throwers we received only one extra attempt. Therefore Kelly missed out on getting one extra chance to move up the rankings.

The competition was won by world leader Bence Halász of Hungary overcame a slow start to win the competition despite a personal best from runner-up Hlib Piskunov of Ukraine. Aleksi Jaakkola took the bronze.