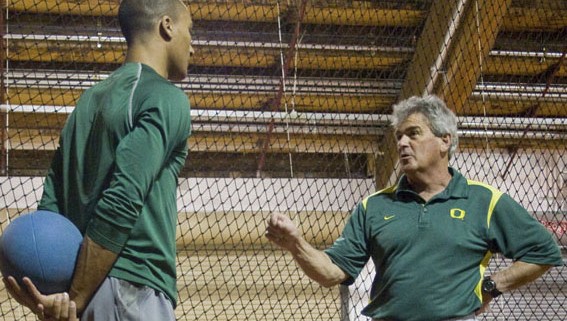 Let me preface this by saying I am a coaching junkie, my passion is watching coaches coach and learning from them. It is a bonus when the athletes they are coaching are the best of the best. In February of this year at University of Oregon I was able to watch two great sessions. 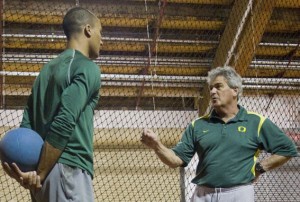 Harry Marra coaching world recorder holder Ashton Eaton and his wife Briana herself an Olympic medalist and world champion in the heptathlon. At the same time Jaime Cook, Assistant Track & Field coach at University of Oregon was working with his hurdler Devon Allen.

I met with Harry before and I went over what they were going to do. He started the session with a mini lesson on the mechanics of the high jump to review what they had done the day before. Then the session was focused on long jump especially rhythm of last six strides. It was great to see the communication between coach and athletes and Ashton and his wife worked to together to reinforce what Harry was emphasizing. It was fundamental with a focus on the basics, nothing overly complicated. Language was clear and coaching cues were short and on point. It was clear to me that coaching has made a huge difference in Ashton’s and Brianna development and it was abundantly clear why they are champions.

At the same time Devon Allen was doing a hurdle workout. They were working starts over three hurdles and then five hurdles and some running one step drills. I was especially interested to watch Allen because he had torn his ACL on the opening kickoff in the Rose Bowl just thirteen months before. It was quickly apparent there were no residual effects from the injury and subsequent surgery. I came away super impressed with Allen’s almost perfect textbook lead leg action, possible one the best I have seen in 46 years of coaching. This kids work ethic is off the scale doing both his football and track workouts and attacking them.

It was a 6:30AM team off-season training session coached by Jim Radcliffe, Head S&C coach at University of Oregon. It was dark and cold when they started. It was the last training session of the week with a strength training session to follow. Jimmy did a twenty-minute extensive warm-up session. The goal of the session was to break into their position groups and work on specific football speed appropriate for their positions. There was no standing around. They train the way they play – FAST. Before they did the speed development they did a session of throws and jumps again related to the demands of their position. Then they started the speed work and it was fast, I must say that seldom have I seen football players move with the speed and precision of movement these guys were executing, a real tribute to coach Radcliffe and his staff. I also must emphasize that there was no screaming and hollering at the players, just coaching corrections, emphasis on cues, basically good teaching. When the payers were in their groups they were player led! I walked around to watch each group and when I got to the wide receiver group there was Devon Allen, the hurdler running patterns and other speed drills. My immediate thought was this kid is a throwback to bygone days. He did not hold anything back. After the session I was with coach Radcliffe when he called over the football players that also ran track and he spoke to each one and asked how they felt when he got Allen his response was what is tomorrows workout!

I could not help but think of these two workouts as I watched Ashton win the Olympic trials in a world leading score with a dinged up leg. He was essentially 85 to 90% at best but because of the workouts I saw in February and the trust in his coach with the emphasis on fundamentals he was able to execute. Same thing watching Devon Allen dominate the hurdles on his way to making the Olympic team. The strength that he developed by doing the multiple workouts in track and football served him well. It is a tribute to the sports medicine staff at Oregon who got him back 100% from the ACL surgery and his coaches, but above a tribute to his focus. It is going to be fun to watch these clean athletes compete with the world in Rio. Somehow I think those workouts in February will make a difference. Onward, upward, higher, faster and stronger!