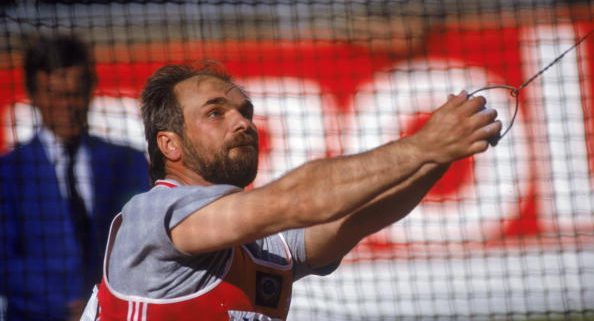 On Sunday Anita Wlodarczyk broke her world record again, her second time this month and seventh time overall. The women’s record has improved so steadily – eight times over the past eight seasons – that it makes us forget how stagnant the men’s record is. You might not have noticed, but today is the 30th birthday of the men’s world record. On August 30, 1986 Yuri Sedykh watched his hammer sail 86.74 meters. No hammer has sailed that far since.

If you look back at the record books Sedykh’s mark is of a different breed than the rest. Only Jürgen Schult’s discus record has lasted longer, and by a mere two months. Every other men’s record was set since 1990. Sure, doping was rampant in the 1980s and the Soviet Union was no exception. But records by the likes of Ben Johnson and others have been made to look pedestrian and yet Sedykh’s hammer mark still stands. And it’s not like doping has disappeared – of the initial top five finishers at the 2004 Olympics, four went on to serve doping bans – yet the record lives on.

In hindsight, the results leading into the 1986 European Championships indicated something special would happen in Stuttgart. After a down year in 1985 with no major championships, Sedykh had bettered his own world record in June of 1986, beating Litvinov in the process. At their next meet it was Litvinov turned the tables to break 86 meters and win. But in the six weeks before the championships they did not face off, waiting for the main event in Neckarstadion.

On the evening of August 30 Litvinov sprung out to the early lead, just 30 centimeters under his personal best. Sedykh seemed to struggle and even after collecting himself must have been dumbfounded to find himself in second despite opening throws of 83.94 meters, 85.28 meters and 85.46 meters. He would have to head into the finals in second place.

As his turn came to take his fourth attempt, the crowd began to clap, Sedykh spun three times and launched the hammer with two yells to propel it along. He raised his right hand before he even left the ring and when it measured 86.74 meters and he literally jumped for joy. Litvinov wasn’t not able to match that performance and Sedykh proved the mark was no fluke with two more throws that scared the record: 86.68 and 86.62 meters.

Watching the competition from start to finish is something every thrower should do. I dare you to do it without getting goosebumps:

Earlier this year I called up Sedykh’s coach, Dr. Anatoliy Bondarchuk, to ask him about the record. Bondarchuk, himself an Olympic champion and former world record holder, knew a thing or two about competing at the highest level and in the lead up to the championships he knew something special was coming:

“The time was right. [Sedykh] was 31 years old. After that age your results start to drop. This was his last good peak condition. He also reached the peak condition well. Sometimes he reached peak sooner or later . . . the body is not a machine after all . . . but in 1986 it was perfect timing. In training he had 7.5kg hammer over 85 meters. Normally the difference [to the competition hammer] is 2-3 meters. So I thought he would throw a world record. But Litvinov also had good performances.”

Indeed, as Litvinov showed in round one, he was in shape too. Sedykh couldn’t find his throw, but Bondarchuk was optimistic after watching a tight throw hit nearly 84 meters in the first round. Sedykh came over to Bondarchuk after that throw and his coach’s instructions were simple:

“I talked about rhythm. He was a little tight on his first throw because he wanted it after such good training results. This is normal. After he relaxed and had three throws over 86 and five throws over 85m.”

It’s nice to hear that even world record holders face the same problems us laymen face.

The rest was history and, after 30 years, the records seems like it might make it another decade or more. Will we see a new record in the future? Will someone be able to break 87 or even 88 meters? I’ll take up that question later this week in a chat with the only other man in history to throw over 86 meters: Sergey Litvinov.