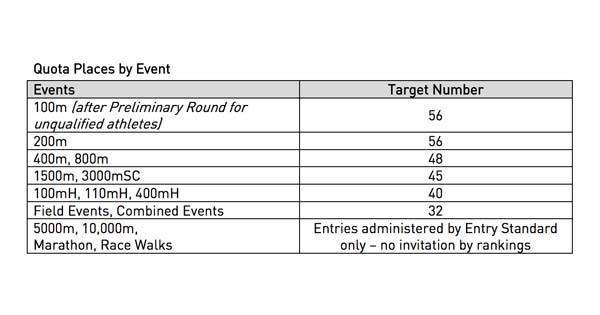 When the IAAF changed its qualifying system a few years ago, one of the major goals was to provide a better method to estimate and cap athlete participation throughout all events. The prior qualification system used in London resulted in the IAAF being more than 10% over the athlete quota given to them by the International Olympic Committee. The new system tried to remedy this by making the standards much harder so that fewer athletes qualified, and then handing out special invitations if any surplus existed. With such a system the IAAF would be able to hold its quota, and perhaps prepare itself for potential future reductions to that quota as a result of new IOC President Thomas Bach’s Project 2020.

The problem is that the system failed in this regard. Despite all the planning, in August the IAAF announced it had a record 2,283 participants in Rio, up 2.3% from the previous high of 2,231 athletes in London and well over its quota of 2,005 athletes.

About the Quota System

To take a step back, the IOC sets a limit for how many sports and how many athletes can participate in the Olympics in order for the local organizing committee to organize a set amount of rooms, food, etc. The quota for athletics is currently 2,005 athletes and the IAAF is given discretion on how that is allocated among the 24 events and clear preference is given to the events outside the stadium (marathon and race walking); the three events make up nearly a quarter of the participating athletes and as many as all eight field events combined. The reason often given for this is that a 26.2 mile race with 20 people would look a bit weird. Running events also get priority over field events. The justification here is that adding an additional heat for running takes up less time than adding an additional field event athlete. Both justifications have their flaws – for example the Olympic triathlon regularly takes place with a third the number of competitors as the marathon as is no less interesting – but that is a debate for another time. For now, we will assume the IAAF is correct in wanting five times as many marathoners as long jumpers and nearly three times as many 100-meter runners as discus throwers. With that assumption, did the IAAF’s planning finally help it meet its quota?

Did the New Qualification System Hit the Targets?

The result is clear based on how far over the quota the IAAF was. As mentioned above, the IAAF had a record number of athletes and was 14.2% over it’s IOC athlete quota. While in theory the new system should work, it only can actually work if the standards are hard enough. The problem with the IAAF Olympic standards were that they were only made significantly harder in some events, primarily the field events. Only in 3 men’s events and 4 women’s events were invitations actually sent out; the over events were all oversubscribed.

By strengthening the standards in the field events the IAAF was able to essentially meet its target there, having on average just 3.8 athlete per event more than expected. But in other events, athlete participation was out of control. The sprints registered 24.3 athletes OVER the target size per event and some events were nearly double the budgeted amount of athletes. In the hurdles and middle distance events were also well over the target. And this does not take into account the events with no target field size such as the long distances and walks where, for example in the men’s marathon, field sizes ballooned by more than 50% when compared to London.

The new system in effect discriminates against the field events. The IAAF is clearly capable of predicting the field size in each event, but only chooses to do so in certain events. The result is that limits are set in the field events and kept, but limits are disregarded most everywhere else. The IAAF will face some tough questions on where to make cuts in the future if the IOC follows through on reducing the quota for athletics. How the current quota has been applied should be kept in mind whether discussing whether to eliminate or reduce athletes in certain events.

The IAAF sets target field sizes, but only really enforces them in the field events. Click To Tweet

Growing Our Sport Through Better Standards

The big question the IAAF should be asking is how it can best use its quota to best promote the sport. When we start thinking about standards in terms of statistics we start to lose sight of our sport. After all, if we just focus on numbers then how is a pole vaulter different than a table tennis player; they both represent just one athlete. We need to see what makes our sport stands out. The way I see it, the main value proposition of athletics is its diversity:

Rather than focusing on this diversity, the overall IAAF strategy seems to be focused on sprinting and distance running and the standards reflect this too. These events may bring in more sponsorship dollars in the short term, but neglecting the other events and diversity will lead to the continued decline of our sport in the long-term by getting rid of its value proposition.

Qualifying standards should be used as a tool to promote our sport, not kill it. Click To Tweet

Each athlete going to the Olympics is getting some type of support, so by controlling who gets to go the Olympics the IAAF can indirectly controls how much support each event group gets. Federations allocate funding based on who will make the Olympics and fewer field event athletes means less financial support for those events. Fewer field event athletes also means less press coverage in local papers, fewer role models for kids to look up to, and more athletes leaving the sport. Standards may seem trivial, but the future of the sport starts with them.