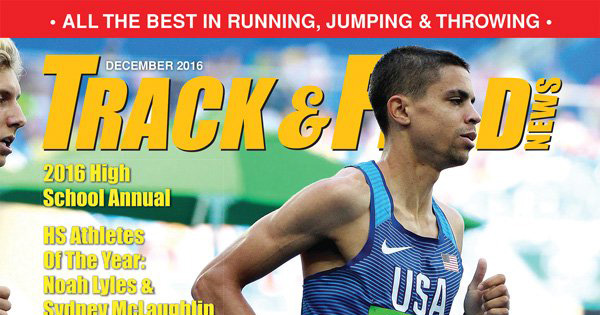 With the 2016 wrapped up, the annual awards have slowed started to come out. Recently Track and Field News, the bible of the sport, just announced their high school All-american team.

The Track and Field News tradition dates back to 1974. Each year the magazine puts together a panel of experts to rank the top athletes of the year by taking into account factors like distance thrown, big meet finishes, and head-to-head performances. In the hammer throw the top three boys and girls earn the title.

The three boys All-Americans were also the three farthest throwers of 2016. Bobby Colantonio led the way to win his second straight honor, the only repeat award winner among this year’s honorees. He was clearly the best thrower in the country this year with his best result nearly 30 feet ahead of his competitors. Wins at New Balance Nationals, US Junior Championships and more padded his resume. He also now ranks fifth all-time. Behind him were a pair of New Yorkers in Cameron Thompson (Lakeland/Panas, Cortlandt, NY) and Michael Feldman (Tottenville, Staten Island, NY). Without many head-to-head competitions amongst the top throwers, results at New Balance Nationals reigned supreme and Thompson and Feldman were ranked in their order of finish from there.

Leading the way with the girls All-Americans was unsurprisingly Joy McArthur (Mater Dei, Santa Ana, CA). Unlike the boys, however, the rankers seemed to discount results from New Balance Nationals. McArthur did not compete at the meet and earned her ranking from her national lead, and a consistent season, and a win at the USATF Junior National Championships. She also moved up to second place all-time. Alyssa Wilson (Donovan Catholic, Toms River, NJ) ranked first in the shot put, but competed sparingly in the hammer. She only placed fourth in a close competition at New Balance Nationals, but gained points as the second best high school thrower at the USATF Junior Championships. Kamryn Brinson (Marist, Atlanta, GA) placed just fifth at New Balance Nationals. Both, however, put up some big marks this year and were the only other girls to break 190 feet during the season.