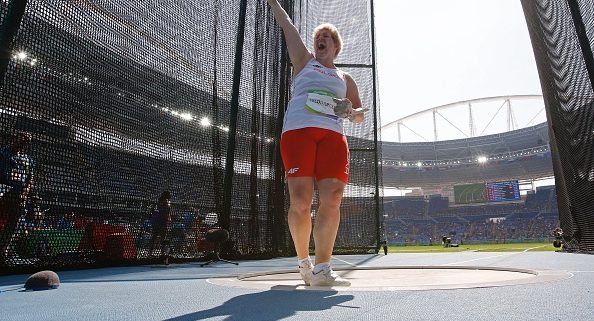 It’s that time again. The international season is about to start up and I’m eager to see the best throwers get back in the ring. As I do every year, I’ve compiled a list of the top reasons to watch our sport’s most exciting event in 2017.

Over the course of two years, Anita Wlodarczyk added three and a half meters (a 4.5% improvement) to the world record. Last season alone she improved her own mark by nearly two meters. The new standard sits just two centimeters short of 83 meters. Does she have more in the tank? Can she take the record over 83 meters? Over even 85 meters? We will have to wait and see, but her recent track record shows no sign that she is slowing down. At age 31, she is in her prime. The only thing working against her is a lack of competition to push her to the next level. She won the Olympic Games by nearly six meters and now has a winning streak 30 competitions with her last loss nearly three years ago.

Wlodarczyk’s teammate Pawel Fajdek also dominated the 2016 season. However his one loss was a big blemish as he failed not only to win the Olympics, but also did not even progress to the finals. In 2017 he will be out to prove, without a doubt, that he is still the best in the world this year. This is not his first time on a revenge tour. If you think back four years ago, the same scenario played itself out. Fajdek fouled out of the London Olympics, but returned in 2013 to win his first ever World Championship. Perhaps the same story will unfold this year and early indications are positive: he already started his season in April with his best opening mark ever of 81.39 meters – a mark which no one else in the world has hit since 2014- and then more recently tossed 83 meters at an unofficial training competition. The only complication is that this year’s world championships will take place in London, where his big meet troubles started.

Both Wlodarczyk and Fajdek seem to competing against themselves and, as mentioned, the lack of competition may hold them back from reaching their potential. Here’s a quick fix: let them compete against each other. For the first time ever last year the top mark in the world for women (Wlodarczyk, 82.98 meters) was farther than for men (Fajdek, 82.47 meters). Why not throw together some prize money and put them together in a cage match? Track meets are constantly searching for the next innovation and no other event in track and field is as well suited to this battle of the sexes. As both are from Poland, this only adds to the drama. Somebody make this happen.

For the past 18 months, the strongest hammer throw nation in the world has been absent from the international scene. All Russian athletes were provisionally banned by the IAAF at the end of 2015, and since then the IAAF has been busy reanalyzing old samples from athletes and also allowing some individuals to compete again after a thorough screening process. This process has confirmed that some Russians, such as former Olympic champion Tatyana Lysenko and Olympic/World Championship finalists Kirill Ikonnikov, Maria Bespalova and Gulfiya Khanafeeva, will not be returning to the circuit. On the other hand Aleksey Sokirskiy, the fourth place finisher from London, was given the green light to return to competition. Sergej Litvinov and other throwers recently submitted their applications to compete with the decision pending review before the IAAF. No one wants to see Russia banned forever and allowing clean Russians to compete will give this year’s World Championships added value. The question is not whether any Russians will be there, but how many Russians are allowed in.

5 – Can Berry Remove the Asterisk?

Last year Gwen Berry broke the American record with a toss of 76.31 meters. However that record was voided shortly thereafter when she has handed a three-month sanction by USADA. That mark would have been the third best in the world last year, instead the sanction hampered her preparations and she finished just 14th at the Olympics. But this year she has returned strong. Indoors this year she added one meter to her personal best to set a weight throw world record. Outdoors this year she has already thrown a personal best of 74.62 meters to win the Mt. SAC relays. Another meter and she can legitimately claim Amanda Bingson’s record without an asterisk.

America has never won a World Championship medal in the hammer throw. A few years ago the talk was of a potential men’s medal, but that dissipated. This year the women are showing the best chance. Believe it or not, America is the top women’s hammer throwing country in the world. Last year America had three throwers in the world’s top 10 and two throwers in the Olympic final. No other country could match that. Already this year five women are over 72 meters including Berry and veteran Amber Campbell, but also young blood like new NCAA American Collegiate Record Holder Maggie Ewen and prior record holder and Olympic finalist DeAnna Price. Helping the cause is the fact that international standards have declined in parallel with America’s rise. Last year, for example, Amber Campbell placed 6th at the Olympics, the highest finish in recent years and just two meters off the podium. The field is quite open after Wlodarczyk and expect the Americans to continue their push towards the podium.

7 – Can the IAAF Hammer Challenge Survive?

In 2010 the IAAF decided to exclude the hammer throw from the newly created Diamond League. Instead they set up a separate hammer throw challenge which quickly demonstrated that separate is not equal. Now things are slowly getting worse. The number of challenge events in 2017 has shrunk to eight competitions from 10 last year and 13 in 2015. Chances to throw hammer for a living are slowly disappearing. At the same time, Diamond League prize money has been drastically increased, helping the gulf between the hammer throw and other events grow even further. The IAAF recently discussed whether to eliminate one event, the men’s 50-kilometer race walk. If we do not speak up, the hammer throw may be next.

8 – A Professional Circuit With The Hammer Throw

As Reese Hoffa discussed recently on our podcast, the disappearance of post-collegiate meets in the US has hurt the development of all throwers, just like the absence of meets internationally is hurting the hammer throw. USATF President Vin Lananna is hoping to change that with the TrackTown Summer Series. After a short pilot meet last year, the series kicks off with a three meet schedule this summer. Unlike the Diamond League, this series will include the hammer throw. Here’s hoping it helps the next generation of American throwers develop and gives the hammer throw a needed boost as there is plenty of talent in the pipeline.

9 – Changing of the Guard

Speaking of talent in the pipeline, there is a big need for it in America as some of the top men are at or nearing retirement. Three-time Olympian and five-time US hammer champion A.G. Kruger already hung up his shoes after last year’s Olympic Trials. Two-time Olympian and four-time US champion Kibwé Johnson will reportedly retire after the 2017 World Championships. Together Kruger and Johnson have dominated the American hammer scene for the past decade and their absence will drastically change competition for national teams. These transition periods have been bad for America in the past, but now the future is already bright. Olympic Trials champion Rudy Winkler made his Olympic debut last year at age 21. Conor McCullough also made the trip to Rio at age 25. And recent college graduates like Sean Donnelly, Matthias Tayala and many others are approaching the mid-70 meter range. Without a strong support network, the transition from national to international level is difficult, but the door is now open for a few to make the jump.

Few throwers have seen a rise as fast as Joy McArthur. Prior to the 2016 season she had never thrown a hammer. By the end of the year she had throw over 61 meters, competed at the World Junior Championships, and was ranked second-all time among American high schoolers. This year she has already nearly eclipsed her best and is closing in the high school record of 65.32 meters. The American junior record of 68.12 meters is also in her sight, but she will also have a shot at that in 2018 once she enrolls at the University of Southern California.