Welcome back to another monthly installment of our sports science round up. This month, we look at low carbohydrate, high fat diets; usually this is the context of endurance performance, but this time we look at it from the perspective of power performance. We also have an interesting case study of unexplained underperformance syndrome, commonly referred to as overtraining, and papers examining mechanisms underpinning muscle hypertrophy, stretching, chronotype, and the genetics of injury. As always, we finish with a quick fire round-up of other interesting papers that have caught my eye this month. 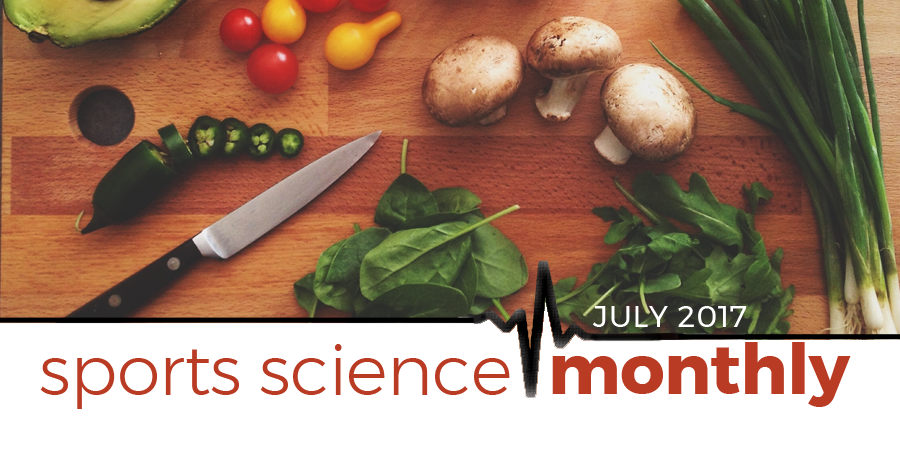 » Quick Summary: The research examining low carbohydrate, high fat (LCHF) diets is primarily aimed at endurance performance, but this paper suggests it might be a useful intervention for power athletes looking to lose body fat and maintain strength and performance in the run up to a competition.

Many a time in this series I’ve looked at and discussed the current trend of low carbohydrate, high fat (LCHF) diets with regards to exercise performance. Typically, this is in the endurance sport domain, where in theory better utilisation of fat should lead to improved performance. However, in practice this often dails due to the fact that endurance races often have components whereby the exercise intensity undertaken by the athlete is raised, requiring greater amounts of energy, in a shorter period of time, than fat metabolisation can provide. This has been backed up in a couple of studies indicating that, for endurance athletes who are focused on competing, carbohydrate is still king.

But what about power sports? Well, the evidence here is very scant. As a reminder, at high exercise intensities, the body prefers to utilise carbohydrates; this would make it seem as if higher carbohydrate intakes are important for power and strength sports, which typically utilise high intensity movements. However, the amount of time spent doing high intensity movements can be very small, such as lifting single repetitions of a heavy weight in Olympic weightlifting. Here, the total carbohydrate requirement will also be low, so in theory a LCHF diet shouldn’t negatively impact performance. LCHF diets also possibly increase rate of weight loss, at least in the short term – something that, in weight category sports, can be an advantage.

This recent study attempted to explore the effects of an eight week LCHF diet on sub-elite Olympic weightlifters and power-lifters. The athletes’ weight was monitored, as was their mood (via DALDA – a daily life stress and mood questionnaire). The LCHF diet was set up so that the athletes would consume 1 gram of carbohydrate for every kilogram of body weight, per day; i.e. a 70kg athlete would consume 70g of carbohydrate per day. There were no limits on the amount of fat they could consume, and protein intake was matched to their normal diets, which was typically between 1-2 grams per kilogram of body weight per day (there was considerable variation in protein intake between athletes).

There were only five athletes in the study, which is an exceptionally low number; however, this was a pilot study, whereby researchers tend to try out new techniques to see if there are any interesting results. Four subjects were males, with one female. Prior to this diet, the athletes consumed large amounts of carbohydrates, in some cases 50% of daily caloric intake. On the LCHF diet, they consumed between 12-16% of daily calories from carbohydrates, with an increase in fat intake from 31-41% total calories to 51-66% total calories. All the athletes lost weight on the intervention, ranging from 1% to 3.8%. However, only four of the athletes actually lost fat (as measured by skin folds). This fat loss ranged from a 4% to a 27% decrease in sum of eight skinfolds. Overall, the athletes maintained strength during the dietary intervention. The weight loss without fat loss could be down to a loss in lean body mass, which wouldn’t be ideal, or it could be down to decreased muscle glycogen stores, which can weigh as much as 2kg. There is also a possibility that it could be down to measurement error.

All of these results indicate that, on the whole, a LCHF diet might be useful for athletes who need to cut weight in the run up to a competition and are not involved in sustained activity. Importantly, the strength levels of the athletes did not decrease, something which often happens in concert with weight loss in athletes dieting to make pre-competition weight. The authors note that this type of diet may not be appropriate year round, particularly when training volume is high, as the lower carbohydrate intake may limit performance and recovery. Overall, this is an interesting and perhaps useful dietary approach to be considered by strength/power athletes looking to lose weight whilst maintaining performance. Given the small sample size, a great body of additional research is required, but nevertheless these early results are interesting enough for it to warrant additional investigation. Of particular interest to me is the result that the LCHF diet wasn’t suitable for one athlete, who lost weight but gained fat. If this isn’t down to measurement error, it indicates that there are responders and non-responders to this type of diet, further investigation of which may lead to personalized sports nutrition guidelines in the future.