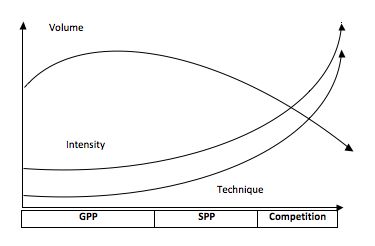 Over the years, I have seen that there are two periods of the year where good coaching can go awry: The pre-season training period and the taper. Both are essential but both are fraught with perils and pitfalls characterized by the same root cause – the willingness/desire/need/obsession to do more than is necessary. Ultimately do to insecurity and lack of trust in the process.

In the pre-season, there is a tendency to overdo and overwork. It is often seen as the last chance to add more before the actual competitive season begins. It is common to use two sessions a day and sometimes three sessions during this period. This fails to consider the work done in the off season and the overall cumulative effect of training. The extra training often has a negative effect sometimes doubling volume. The result is a tired dead athlete going into the competitive season when you want a fit lively excited athlete starting the season on the upbeat. This should be a time for specific training to take advantage of the off-season work. Think optimum not maximum and train to the athlete’s capabilities to effectively adapt. This is also the time when new athletes to the team need to be on ramped into the program. This must be gradual and progressive to not deaden them for the upcoming season. In summary, the goal of pre-season is to get each athlete to the start of the competitive season completely adaptable to the competitive demands and to be able to train sufficiently to sustain a high-performance level throughout the season.

The taper period represents a very similar pitfall. In this period, you should not try to do more or do something that you have never done before. It is a time to trust the preparation and fine tune. One more of anything is risky. What is most important in the taper often is what you are not doing rather than what you are doing.

How do I know these pitfalls? Simply because I have succumbed to them myself. There was a time when I did more in the pre-season and buried the team for the first third of the season. In taper several times I did “one more” hard session to insure they were ready and took away the edge. I took the competition away from the athletes by doing too much. Less is more or to quote the Texas Tornados: “a little bit is better than nada.”