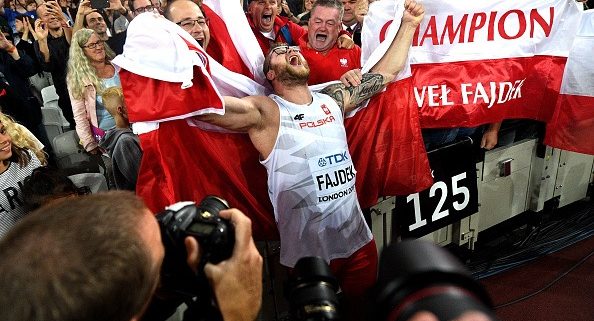 There is always a lot of change after an Olympic year, but the men’s hammer throw underwent a big transformation in 2017. Just four athletes from the 2016 rankings managed to make it back on this year’s list. Six new athletes emerged including the next generation of throwers and some old names returning to the top. Below is our annual rankings for the men’s hammer. Check back this weekend for the women’s rankings.

Pawel Fajdek continued to dominate the hammer throw in 2017 and earned his third straight year-end top ranking. He’s ride a wave of momentum including just three losses over that period. After disappointment in Rio last year he rebounded strong this year producing the top ten results of the year and 11 competitions over 80 meters. His countryman Wojciech Nowicki was the only other thrower over 80 meters and sat three meters behind with just two meets over the barrier. Most importantly, Fajdek delivered when it counted and won the world title by more than a meter and a half.

Despite winning three global medals in 2015 and 2016, Nowicki always seemed like a surprise on the podium. This year that wasn’t the case. He was consistent and dominant all year, becoming the first new member to the 80 meter club since 2014. He broke the barrier twice, and handed Fajdek his only loss of the season in the process at the Polish championships. While he placed just third at the World Championships, that was his only time outside the top two in ten competitions this year.

The 23-year old Russian made substantial progress this year, adding several meters to his best and capturing silver at the World Championships in his first senior global championship. Due to the ban on Russia he did not face international competition for much of the year until he received an exception from the IAAF at the end of July. But domestically he was also strong in winning his first Russian title and improving his personal best to 79.32 meters.

After returning from a doping ban late last season, Bigot reemerged as one of the world’s best throwers this year. Not only were his results good, but arguably better than ever as he produced five of his top eight results over and his top global finish ever. He also had winning records against his closest competitors such as Pavel Bareisha, Nick Miller, Dilshod Nazarov, and others.

With his countryman Ivan Tikhon out this year with injury and family issues, Bareisha used the chance to emerge as his country’s top thrower. Unlike Belarussians of the past, he was not afraid of facing international competition. Seven of ten competitions this year were international for Bareisha and he finished on the podium at all but one. Unfortunately that one was the World Championships, where he missed the top 8 by just 1 centimeter. But strong records against his competitiors throughout the year move him up the annual ranking.

It was a year of ups and downs for Miller. He seemed on the verge of a breakthrough, posting five of his top nine results ever. However he couldn’t find that extra gear and reach a personal best when the competition heated up at some of the year’s highest level competitions like the World Championships and the Ostrava Hammer Challenge. Still he produced his first top-8 finish at a major championship. And with the margins closer than ever, a small improvement will put him in medal contention going forward.

The Olympic champion has off his game somewhat this year. He put together a consistent year, but was a few meters off his form from prior years. In an incredibly close World Championships he finished less than a meter from the silver, but unfortunately that only earned him seventh place. He was rarely on top this year, but still produced a runner-up finish in Halle and fourth place finishes at IAAF Hammer Challenges in Ostrava, Poland, and Hungary.

The fourth-place finisher from the London Olympics switched countries at the wrong time. The former Ukranian was granted authorization to compete for Russia two years ago right as his new country got suspended. This yeaer he got the first chance to compete again internationally and turned in a strong fifth place finish at the World Championships. What hurt his ranking was a middling domestic competition record and avoiding international competition. Unlike other Russians, who were only allowed to compete internationally at the World Championships, Sokirskiy was given authorization back in February and still stayed home throuhgout the year.

While Marghiev never got a big mark to highlight his season, he was quietly consistent and, most importantly, edged out one of his closest competitors Bence Halasz in three of four competitions.

At age 20, Halasz is the was the youngest thrower in this year’s rankings and was the youngest competitor at the World Championships. He had a big breakthrough this year, showing that he can be Hungary’s successor to Olympic champion Krisztian Pars. Throughout the season he improved his personal best nearly five meters this year to 78.85 meters, took third place in one of the season’s top competitions in Ostrava. But at other meets he was more consistent at just the 73 to 75 meter level. He will need a few more years to fully mature, but this year he showed he is on the right path. Marcel Lomnicky was also close to making the list, but Halasz got the edge after having a better season’s best, placing higher at the World Championships, and winning three of four competitions against Lomnicky.