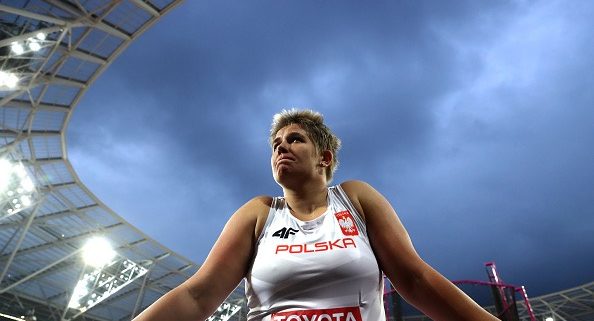 While the men’s hammer featured more competition at the top this year, the women’s hammer was once again the highlight event of the year. Anita Wlodarczyk is a generational athlete that has propelled the sport to a new level and once again led the way on this year’s rankings. But the competition for the other spots was fierce. Our complete rankings are below, featuring the top 10 throwers of 2017.

The case for Wlodarczyk as the top rank couldn’t be easier to make. She threw six meters better than the next best thrower in 2017. She capped off her third straight undefeated season, adding 12 more wins to her streak that dates back to June 2014. She produce nine of the top top ten results in the world this year. Even by her own high standards she was at a top level, producing five of her top 10 meets of all-time and coming within 11 centimeters of her own world record. And even though an injury set her back leading into the World Championships, she still won by two meters.

Wang was one of the top throwers on the circuit this year, with a win in Fränkisch-Crumbach and second place finishes behind Wlodarczyk in Halle, Ostrava, and Székesfehérvár. Unlike previous years, where strong result failed to translate into a podium finish (or a final in Rio), she earned her first ever medal in London. She also produced winning records against her closest competitors, including three wins in three meets again Malwina Kopron.

At just 22 years old this season, Kopron is the youngest thrower to make the rankings. She improved her personal best by over four meters in 2017 and, more importantly, was consistent at this new level. She surpassed her old mark ten times and was in shape when in counted, averaging 75 meters in her meets in August.

Skydan had some ups and downs last year, including a medal at the European Championships and missing the final at the Olympics. This year she found new consistency, placing in the top three on the circuit all year. London was actually the first time not on the podium all season. There she was edged by Zhang on her last throw, but with an overall stronger year Skydan gets the edge over Zhang in the rankings.

As was the case last season, Zhang rarely left China. Last year she had international competition, producing a silver in Rio. This year she had two meets, a sixth place finish at the Kawasaki IAAF Hammer Challenge and fourth at the World Championships. Add to that a late-season win against Wang at the National Games and you basically have her whole resume for the year. With such a small body of work it is hard to rank her much higher.

Entering the World Championships, Berry was the consensus closest challenger to Wlodarczyk. After setting the America record in May, she strung together a series of strong results heading into London. Even at the end of the year, her six competitions over 74 meters was better than anyone except Wlodarczyk. But she continued to have issues against the top competition. While she did win her first US title this year, she placed just 14th in London and threw nearly eight meters under her best. With that being her only meet since early July – and only international meet the early June – it was hard for her to make her case for a higher ranking.

Fiodorow was one of the most frequent competitors in 2017, competing six times on the IAAF Hammer Challenge circuit. She earned several podium finishes and also a medal at the World University Games. She also was able to prove her credentials against some of her competitors like Sophie Hitchon, who she beat in 7 of 9 competitions. But she also lost consistently to those just ahead of her such as Skydan, who took 5 of 6 competitions.

Coming off of a bronze medal at last year’s Olympics, Hitchon couldn’t quiet find her groove this year. She hit her season’s best in her first competition and, while consistent thereafter, never got a bigger throw in. She produced three of her top five results ever, but didn’t get that statement result to help her move up the rankings again.

Malyshik was an Olympic finalist in 2016, but really made a name for herself in 2017 as she competed more internationally, including a medal a the World University Games and big win at the European Team Championships. Malyshik split two competitions with Hitchon, but since Hitchon was on top at the World Championships that gave her the edge in the rankings.

Price was also already an Olympic finalist last year, where she finished 8th. She squeezes into this year’s rankings with another international final and strong showing on the international circuit. Compared to her countrywoman Berry, Price finished higher at the World Championships. But Berry ends the season as the top ranked American having won all five other competitions they had.