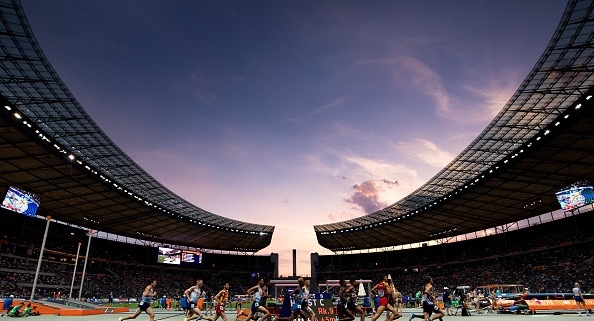 The European Championships took place last week, marking the largest event of the season for track and field. Berlin has a strong base of athletics fans and an innovative event management team. This year they sought to make some big improvements on how a championships meet is put together. I had the opportunity to watch a few days of action live in the stadium, plus every other day on television. Watching the action live gave me a chance to see what worked, as well as what didn’t.

» Related content: hear more about the meet and our analysis of the results on this week’s HMMR Podcast.

1. The little things can help the sport

The highlight of the meet for me was one small addition to the meet presentation: each field event was given it’s own jumbotron featuring the current standings and replays of each throw. This is just a little feature, but as a fan it makes a big deal. Spectators in the stadium might find the hammer interesting to watch, but previously if they were not watching every throw they would now know where each athlete stood overall or what they needed to do to move up the rankings. By simply showing the standings, anyone can now follow the throws.

Making the sport better is often about implementing these little things, rather than trying to reinvent the sport. Berlin had enthusiastic and knowledgable fans eager to follow every event. Give them the opportunity like they did at the European Championships, and the atmosphere is transformed to a new level.

2. The little things can hurt the sport

Just as little things can help, little things can also hurt our sport. Attention to detail is crucial in meet presentation. Allowing fans to actually see the event is a simple concept, but often gets overlooked in the need to set up cameras and benches for athletes. The end result, as Shaun Pickering pointed out online, is that so many people are crowding the ring that fans can’t actually watch it. There were lots of other little things that were off, such as errors with the measuring system. I think the sport is moving in the right direction, but we still have a lot of work to do.

3. We need to keep working on pacing

The pace of the competition was a big focus this year. The IAAF introduced a new rule allowing for just 30 second for each field event attempt. The organizers in Berlin also moved the medal ceremonies outside the stadium to cut down on the stoppage they required at championships. This definitely helped, but the competitions were still way too slow. Field event action is constantly stopped for the other events to be introduced, for other races to take place, and for various unknown reasons.

A field event final has 60 attempts, and in Berlin the events routinely lasted well over 90 minutes. That means that each attempt was taking 1.5 to 2 minutes. With athletes now restricted to 30 seconds per attempt, I think it is clear that the problem does not lie with the athletes. If we want efficiencies we need to look at meet management. To start with, events should not be stopped for every small announcement. In addition, officials need to be focused on pace as much as their other jobs. I do not think the 30 second rule is bad, but I also don’t know if it made the competitions any faster. Rarely are the athletes the problem. Normally slow measurement or slow calling of names is to blame. Officials need to act with the same sense of urgency as the athletes.

At the 2014 European Championships in Zurich launched an interesting concept by creating a fan zone in the city center. Fans could watch a live stream, get autographs, interact with athletes and sponsors, and have fun even if they didn’t have tickets to the stadium. Berlin took that idea to a new level. Breitscheidplatz was transformed for the duration of the meet into a party. In addition to a live stream of the events, the shot put qualification rounds took place there, as well as medal ceremonies. In total 150,000 visitors came by, almost half as much as the stadium, which struggled on several days due to high ticket prices.

Funny enough, the only thing missing from the party was the mascot Berlino. After putting on a show at the 2009 World Championships, he played a background role throughout last week’s action.

Another feature in the meet were how the rounds were organized. In the sprinting events, the top 12 runners automatically qualified for the semifinals. I don’t know the motivation behind the rules, but it hurts the spontaneity of the sport. Did Germany get to skip the group phase at the World Cup? No, and for good reason. Once the championship starts, it should be a blank slate. Everyone should be required to do the same thing to win. But by allowing some athletes to skip the first round, the challenge becomes different for each athletes. A lower ranked athlete in the 400 meters has to run well in the first round and return the next day to make the semifinals. The top ranked athletes, on the other hand, get to show up fresh for the semi, and then have a day off before coming back to the final.

We saw a lot of upsets in Berlin, but it was no surprise that these came more in the field events and distance races than the sprints. If we wanted to see just the favorites in the final we’d just watch a Diamond League meet. Part of a championship is the feeling that anything can happen.  Fans got a taste of that watching young stars Jakob Ingebrigtsen and Mondo Duplantis emerge. That made the meet for me, but these moments will start to disappear if we start playing favorites.