When asked by reporters last month about how he endured such a difficult drama-filled offseason, San Antonio Spurs coach Gregg Popovich had a quick response that put things in perspective:

“Enduring is pretty much a misnomer. [We’re] playing a child’s game and getting paid for it.”

Hammer throwers have to endure a lot and I often vent on this page or rant on our podcast about stuff that drives me crazy as a coach: doping, cheating, qualifying standards, corruption, the marginalization of the field events, or simply poor leadership. If I take a step back though, like Coach Popovich, I haven’t really had to endure anything. I’ve been given the gift of sport and can practice it every day. This is a lesson I learned first-hand from Harold Connolly, who died eight years ago today. It’s also a lesson that is too easy to forget when we are distracted by the latest headlines. 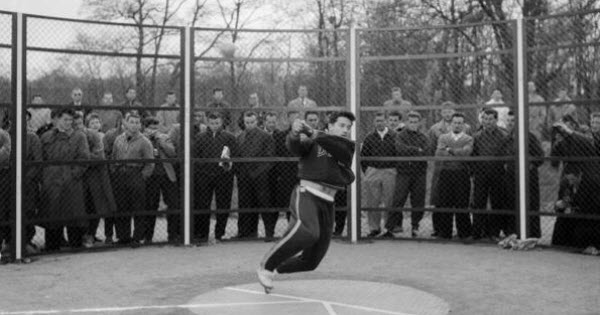 A real test of endurance

As I wrote about last year, Harold Connolly fought for the sport and for hammer throw every day. He fought the AAU against the arcane amateurism rules. He the IOC in support or equal rights. He fought the USATF to create more opportunities to develop the hammer throw. It was an uphill battle, but he continued undeterred. He was able to do so because he had perspective.

I am biased, but I think that there is something inherent in the hammer throw that helps give hammer throwers perspective. It’s unfortunate that the world’s best hammer throwers remain on the periphery of track and field. But that also helps ensure that athletes keep a perspective about why they throw. This is what kept Harold motivated for all those years. And in talking recently with curren thrower Sergej Litvinov, Jr., it is also what has kept him motivated through the different test of edurance he has faced over the past three years.

Back in 2014 Litvinov was on the podium at the European Championships, but from that high point things change rapidly. The next year the entire Russian team was caught up in scandal and banned from international competition. With a track record stronger than non-Russians, I helped him with legal appeals for nearly two years. Unfortunately he missed out on his chance to make his first Olympic team and fight for a medal in 2016. Last summer, he finally won the right to compete again. But with just two weeks until the World Championships, it was impossible to prepare. This season the troubles continued. First, the ban was reinstated and a new application was required. Then his father and coach unexpectedly passed away in February. Despite six months to review his most recent application, the IAAF never did reply before the European Championships. 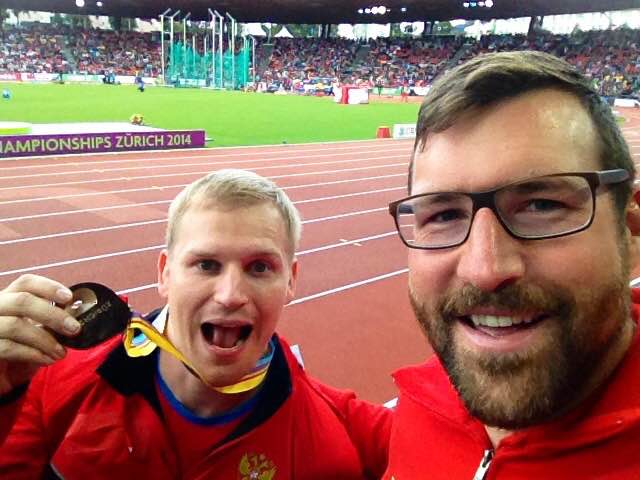 At the start of this saga, Litvinov focused on advocating for change in Russia and for better anti-doping systems worldwide. After three years without progress, Litvinov gained a little perspective this year and decided to focus instead on things he can control:

“I still stop to think about our problems in athletics. My father’s death was hard for me, but the life goes on. This year it is easier to focus on my training . . . The most important lesson in my sports career is that only the amateurs really love the sport. Professionals forget very fast why they are doing this. The same for me, it was very hard to not train that much this year, but this was very good for my head. Now I have fun again.”

With a new focus on having fun rather than winning medals, Litvinov has refueled his passion for the sport and committed to staying involved in the long term. Connolly and Litvinov are not alone in finding passion and using that to push through difficulties. You can find examples like this all across the sport.

The science of motivation

For decades, scientific research has backed up what Connolly and Litvinov observed first hand. Among psychologists, the field of self-determination theory looks at the motivation behind choices people make without external influence and interference. People that are motivated intrinsically—that is for the love of the game rather than for financial or other external rewards—are more likely to be successful. In fact, the effect is so extreme that if you look at youth athletes, how an athlete is motivated is a better indicator of whether they will continue with the sport than whether they are good or not. Simply put: intrinsically motivated athletes are more likely to continue in a sport.

More stories from the front lines

Life as a professional may make it harder to find intrinsic motivation, but it is not impossible. As Litvinov has shown, it is possible to reorient your compass, and he is not the only athlete to make that transition.

In an interview earlier this year, tennis champion Andy Murray talked about coming back from injury and trying to make it back to Wimbledon: “With sport you play to win but when you are away from something you love doing for almost a year you realize you’re playing because you love it.”

On a podcast interview in July, Olympic shot put champion Adam Nelson explained his path to perspective. After barely missing out on Olympic gold in 2004 (which he was subsequently given after a doping ban for the winner) and being insulted by Nike, Nelson was fueled by hate. That only powered him for so long:

“If anger is your sustainable emotion, you’ll be a miserable nasty person. If you are serious about doing something you have to be passionate about it. That passion needs to be motivated by a general joy in what you do. When I made that transition, I could deal with the big things better.”

As with Nelson, miler Nick Willis was also impacted by retroactive testing when his bronze at the 2008 Games was upgraded to silver. For many years he was preoccupied with fighting doping and shedding light on the topic. At a certain point it became too much, and he refocused on what he could control: his own running. This rekindled his career. As he told the NZ Herald earlier this year:

“Potentially people left and right of you could be doping, but that’s irrelevant because you’re trying to get the most out of yourself. Otherwise it makes you angry or bitter and you can’t perform to your best.

Halfway through my career I was wrestling with this. I was no longer naïve to the situation, and you have to decide if it’s a sport you want to be part of or walk away from.

We decided we were going to find a way to get joy out of my performances, separate to what other people do.”

These stories all follow a similar narrative: athlete falls in love with the sport, athlete loses perspective, something happens that makes them refocus, and then they achieve even more.

Everyone praised Popovich’s quote as it made the rounds on social media, but the next day most of those same people simply went on with their training as normal. Connolly and Popovich are the rare individuals that seem to have never lost perspective. For the rest of us, we have to find our way back home since rarely do we reorient our compass on our own. Ironically, it often takes external factors to make us focus internally again. In all the examples above it was a political decision or injury that led the athletes to reassess their perspective.

Similar to Murray, for me it was my simultaneous back injury and the birth of my daughter in 2015 that helped give me perspective again. Last month at the Swiss Championships I achieved my best result in three years and won my ninth title. I was of course happy, but, had I lost, my mood wouldn’t have changed much. At this point in my career, a good result is just icing on the cake. I spent the day surrounded by friends, family, and my training group doing what I love. What really made my day at the meet was a breakthrough from one of my throwers. Over the last year her self-confidence and training results have grown in parallel. Everything came together for her that day. She shattered her personal best many times and made her first championship final.

Seeing athletes’ lives change through sport is the main reason I started coaching and I never want to lose sight of that. Harold Connolly showed me how the power of sport turned his life around, and he helped use that same power to turn me from a failing fat student into an overachieving adult. Over my career I lost sight of that, but have found my way again recently and enjoy throwing more than ever.

Rather than waiting for a major event to make us remember our love for the game, we should take stock of our situation every day. That’s what Connolly did. The more we can do that, the stronger and healthier our entire sport will be in the long run. It’s easier said than done, but just because it is hard doesn’t mean we should forget about it. It wasn’t easy for Connolly either, but he kept perspective until the day he died.