Running is a staple in all rugby physical preparation programs due to players having to cover approximately 4km+ per match. However, being a collision sport, players will experience between 800-1200 impacts per game ranging from light (5-6g) to severe (10+g).1 Being well conditioned to impact is likely to reduce the risk of injury in contact and develop the ability to withstand many impacts in a match.

I first heard about combat conditioning reading a post by Keir Wenham-Flatt. Having piqued my interest, I was lucky enough to meet collegiate wrestling coach Andy Stone at the 2017 GAIN conference. After some discussion, he was nice enough to show me with some basic wrestling techniques that could be implemented in combat conditioning fashion. I have blended this insight with some of my own grappling experience to design conditioning sessions with differing goals or physiological outcomes. Throughout this article, I will detail some of the reasoning behind combat conditioning and some examples that I have used in this past rugby season.

» Learn more: James explains his approach to training on this week’s HMMR Podcast. Stay tuned this month as we continue to focus on training for rugby with new resources.

The role of combat conditioning in rugby

I like to think of combat conditioning as “filling the gap” in conditioning for rugby. As we know, rugby consists of locomotion at varying speeds intermixed with periods of contact and collision as stated above. It makes sense then to develop work capacity along with technical mastery in contact. Additionally, conditioning adaptations are specific to the task being performed. For example, swimming as the main conditioning modality for a running based sport will provide some general adaptations but won’t fulfil the specific needs of the sport. Hence, providing a specific conditioning stimulus through the form of wrestling and grappling may serve to “fill the gaps” in a rugby players program. 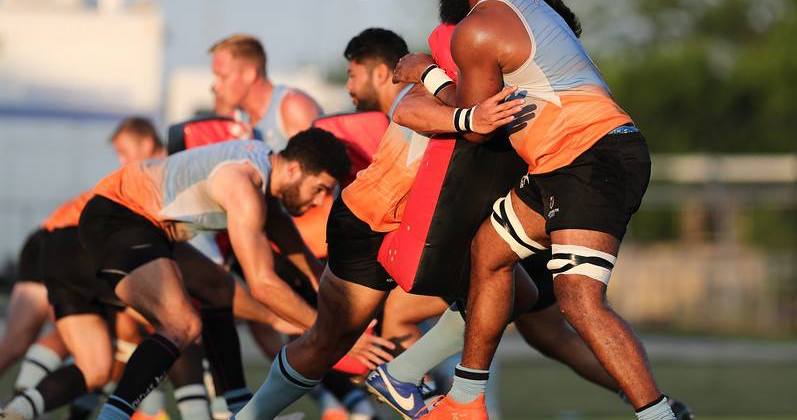 Other than developing conditioning during contact, I’ve found some other benefits to the use of combat as a training modality:

During the beginning stages of a pre-season, players generally aren’t in contact situations that put them on the ground or taking any impact at all. Implementing gymnastics work such as tumbling is an option here but the athlete controls where, how and when they want to land. Whereas in a low intensity tackle situation, landing is a little more uncertain with another player holding a leg or applying force in a certain direction.

As the season gets closer, players are often thrusted into full contact with tackle suits and hit shields. However, a player in a tackle suit still takes a strong impact to stop. Hence, combat conditioning can be used to condition players to the rigors of full intensity contacts. Furthermore, a good tackle technique will more likely keep a player safe from injury during contact. Reinforcing tackle technique is the biggest reason for me implementing combat conditioning work. In conjunction with the skills coach, we devised a progression we could use purely sub-maximally as to have more time to drill different components of the tackle. For example, the progression may look like this:

From the first exercise, we can reinforce the same tackle mechanics and cues throughout every stage. During the pummel it’s learning to move your foot in-between the legs of your partner with the same side shoulder making contact. “Same foot, same shoulder.” Following this, keeping the head in tight through using the neck carries over to the rest of the tackle variations. The player getting tackled will fall to the ground as to simulate a completed tackle. With this progression, the tackle drill gets more technical. At the same time, intensity of the impact slightly increases as the players start further away from each other and move towards each other.

Integration of combat conditioning into training

Grappling drills provide a strong warm-up stimulus before defense and/or contact sessions. A warm-up session may look like this with players being in partners:

The goal of this warm-up is to make the athlete feel prepared to take large impacts during training. This differs from the aerobic development emphasis below. Here, after the standing pummel, everything is done at maximal intensity. The last exercise listed involves some impact with the player standing dropping onto the player on his back.

For developing aerobic qualities during combat conditioning, I’ve taken a simple set/rep scheme and essentially added volume throughout a pre-season while progressively working through the tackle tech exercises. Sessions usually consist of 2-4 varying exercises done one after the other and are not limited to the progressions listed above. For example, one of the first sessions might look like:

You can perform multiple sets of this as you progress through the work or you can perform longer working reps for a greater conditioning effect. The idea of this block is to build the time of work done at a submaximal level. A session later on in the pre-season may look like this:

During the tackle tech exercises, players would alternate two hits each (1 each shoulder).

This is where you can have a lot of fun and really let the players go at each other. Not everyone has access to wrestling mats that would allow them to grapple 100% from standing to the ground. However, there’s some modifications I’ve made for when doing so on harder surfaces such as a field in Texas. These are my go to exercises:

You can use 1 or multiple exercises in a set during this block. Your typical set/rep scheme would apply here. For example, 30sec maximal effort with 2-2.5 minutes of rest. You may notice there’s no actual tackling performed. This was done for a few reasons: 1) no access to mats, 2) not enough equipment such as tackle bags or hit shields for each pair to have one, and 3) full contact is now being performed in technical practice.

Overall, combat conditioning is another tool to add to your toolbox for preparing your athletes. The great thing about it is that the intensity of impact can easily be modified depending on the stage of the season. Combat conditioning can also provide an alternative to reducing lower body impacts from running in-season making it another off-feet conditioning option. If you’re looking to implement combat conditioning, work together with the skills/technical coaches to develop a tackle progression or find out where the players need the most work. If it’s not in the tackle, it may be in the ruck where different drills can be utilized.