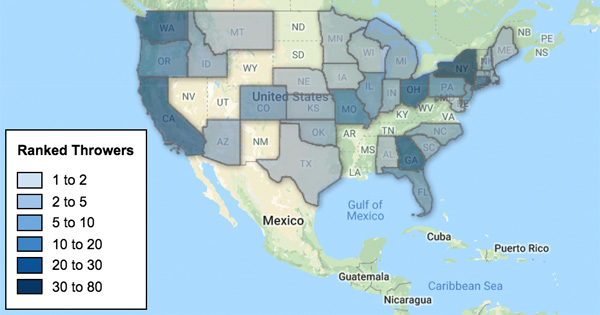 As we finish up our look back at the 2018 season it is time to look at how the event is spread across the country. As we do every year, we like like to take a look at the sport through a geographic lens to show which states are on the rise and where the sport is spreading.

» Related Content: HSHammer’s has been taking a look at the 2018 season. Check out the final rankings, all-Americans, new records, and growth trends.

The top three states remained the same with Rhode Island, New York, and Georgia leading the way. California continued to show growth and moved up three spots to fourth overall with 24 athletes qualifying for the national rankings. Ohio dropped down one spot, and Washington held steady as the sixth state with more than 20 ranked athletes.