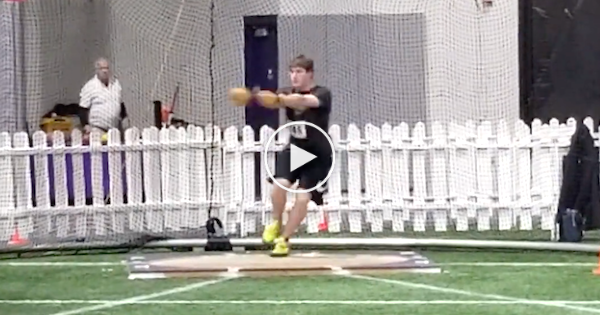 During the last two seasons, Trey Knight (Ridgefield, WA) has shattered every high school record for freshmen and sophomores. This year, as a junior, he has also broadened his scope. Already in December he broke the national junior class record with the heavier collegiate 35-pound weight throw. At this Saturday’s University of Washington Indoor Preview he not only extended that record by four feet to place second, but also produced the best throw ever by a high schooler of any age with the implement. US hammer throw champion Alex Young won the competition.

The previous national high school 35-pound weight throw record was set back in 2010 by Davis Fraker (SR McIntosh, Peachtree City, GA). His throw of 65’8.25″ has lasted nearly nine years as Fraker went on to become an all-American and break the school record at the University of Illinois.

After opening Saturday’s competition with throws of 18.66 and 19.03 meters, Knight’s third round throw did the trick by flying out to 20.72 meters (67’11.75″). Knight has yet to claim the junior class record with the high school implement, but currently leads the nation and will be chasing the mark in the coming months.