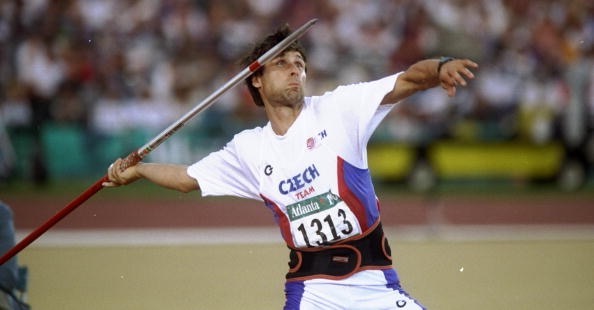 On last week’s HMMR Podcast, guest Kevin McMahon talked about how lifting and throwing chase different feelings. A maximum squat has a very different feeling that a personal best throw. A good throw is like a sprint: it is loose and quick, not a grind like heavy lifting. Maximum strength plays an important role in develop throwers, but McMahon emphasized that it should not take priority over the feel for the throwing movement.

The biomechanics of throwing

The difference in feeling can be explained by looking at the biomechanics of the throwing events, which has practical implications for training the throws. The purpose of throwing is to maximize the speed of the implement at the instant of release. Just a few factors influence the distance of the throw and the speed of release is the most significant determinant of the distance thrown. So how do you achieve a fast release speed? Through the summation of forces from one body part to the next within the kinetic chain.

Let’s use the javelin throw as an example. The athlete starts building up speed on the runway through the run-up, and attempts to maintain this into the final delivery. During the delivery, a right-handed thrower drives off the right leg, transferring weight from this back leg to the front. As this happens, the hips violently rotate, followed by trunk rotation, internal rotation at the shoulder, and extension at the elbow and wrist. The rotational movements are facilitated by blocking the front leg, which brakes forward momentum, and allows a transfer of momentum and velocity to the next body part.

All throwing events require the same principle of summating forces through the kinetic chain. It expresses itself differently in each throwing event. The “whip-like” action just described is rather unique to the javelin, and the hammer throw has its own unique characteristics, as do the other events. In many throwing movements across all sports, the key to optimizing the transfer of speed to the implement is the ability to allow each subsequent body part to “lag” behind the previous one. The hips may rotate, leaving the shoulders to lag behind, and in turn, the throwing implement is further lagged. In order to achieve this, the athlete must avoid excessive tension in the muscles. On this week’s GAINcast, Steve Backley compared throwing the javelin to casting a fishing pole. To take that analogy, you don’t improve your cast by tensing more muscles.

Add in the adrenaline of competition, and things get complex. The fascinating challenge for athletes in the throwing events is getting the balance between being mentally aroused and “fired-up” to activate muscles to produce explosive force production, but still remaining relaxed enough to avoid tension that may limit lagging. I have personally witnessed this balance being effective as well as ineffective in the javelin world record holder, Jan Zelezny. In one throw, he was so tense that he totally mis-timed his throw, hardly reaching 70 meters. In the very next throw, he corrected the timing and was back to his normal self, throwing well over 80 meters. This highlights the importance of technique, timing, and “feeling” the throw, rather than trying to grind it out with pure strength.

So what does all this mean for training? The way I see it, the legs must be very strong and powerful, as they initiate the delivery action. There is no way around this and this provides a rationale for the value of the strength program in the lower body.

Since trunk rotation is also crucial, all throwers should select exercises that target trunk rotators. The arm action varies, depending on the throwing event and implement, so exercise selection needs to consider these differences. Since the arm action is late in the summation of forces, the arm is already moving fast before the muscles commence their contributions. Therefore these muscles must be trained for speed, much more than maximum strength.

It’s about more than strength

Beyond strength, there are also several other training implications that need to be taken into account. For example, without mobility to allow for lagging of body parts, the summation process is compromised. Even a huge engine will not be able to transfer much force to the implement in that case.

Another characteristic of throwing is that muscles become pre-stretched as body parts lag, and therefore their action can be described as a fast stretch-shortening cycle. A good way to train for this demand is with medicine ball throws similar to the event, as well as with overweight (resisted) or underweight (assisted) implement throws. Give careful consideration to the volume and loading used with overweight and underweight throwing to minimize the risk of injury.

Throwers often focus first and foremost on the strength and force element, neglecting how the summation occurs. By getting back to the basics and seeing what really matters most–the speed of release–training can be optimized to get the most out of the throw.