Every month we take a deep dive into the latest research in sports science. In the August Sports Science Monthly we continue a discussion we started last month and look at monitoring in sports, specifically Acute Chronic Workload Ratio and its role in injury prediction. Then we look at microbes, caffeine, Nordics, and priming for performance. 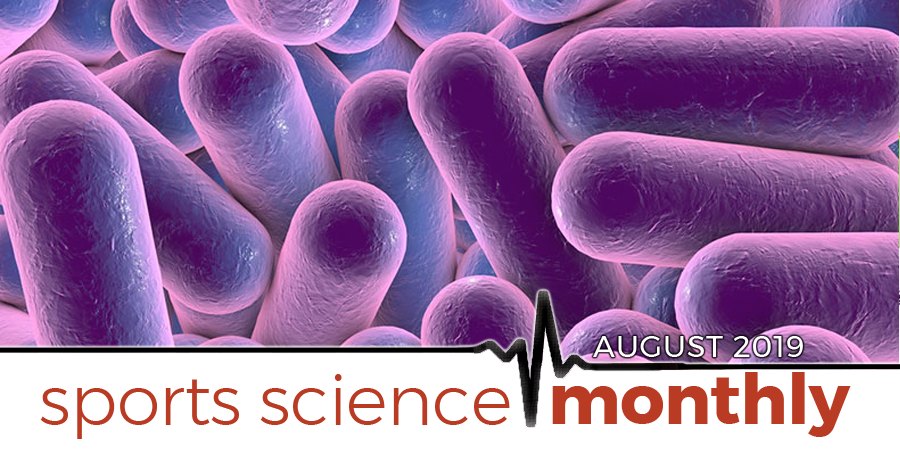 » Quick summary: The Acute Chronic Workload Ratio is associated with, but not predictive of, injury risk in a group of Australian Rules Football players. This means that, once a player is injured, if we look back at their training load, we will see an increase in acute relative to chronic training loads. This makes it seem like the ACWR is predictive of injury risk; however, if we get a group of players with a high ACWR score, many of them will not go on to be injured. This is clearly an important aspect to consider when utilizing the ACWR in practice, and placing ACWR scores in context.

In last month’s column, I had a long discussion around some of the recent skepticism surrounding training load monitoring, and in particular the acute chronic workload ratio (ACWR), and its ability to predict injury in athletes. One study that I didn’t include, but that I think is hugely important in enhancing our understanding of some of the practical issues with ACWR, is this, published in Science and Medicine in Football over a year ago.

In this study, the authors collected training load and injury data from 34 professional footballers, all from the same team, across three competitive seasons. Training load was determined via the session RPE method (sRPE), in which the players’ self-rated session RPE was multiplied by the duration of the session. This value was then averaged across the week to calculate weekly training load, from which the ACWR could be calculated. As discussed last month, there are a variety of ways by which ACWR can be calculated, and so for the purposes of this study, the researchers utilized methods in which two, three, and four weeks were used to calculate the chronic load. Overall, there were 90 non-contact injuries across the three seasons. There was a clear and significant association between ACWR and injury risk, in that as the ACWR increased, so too did risk of injury.

On the surface, this suggests that the ACWR is useful in injury prediction, but we have to take a closer look into the science here. As I’ve mentioned before, what an association tells us is a relationship between two variables that happened in the past. In this case, players with a higher ACWR were more likely to have gotten injured than when their ACWR was lower. But, this is not prediction, because prediction is about what happens in the future (for a primer on this, see one of my previous HMMRMedia articles). So the main question is, rather than being able to explain what happened in the past, can ACWR discriminate injury risk between players in the future; a subtle, but important, difference. To test this, the authors utilized something called the Receiver Operating Characteristic (ROC), which gives us insight into the ACWRs ability to correctly determine the individual with the highest injury risk when two players are randomly assigned. An area under the curve (AUC) of 1 would represent perfect prediction ability; an AUC of 0.5 represents no predictive ability.

In this study, the authors found that the AUC was between 0.55 and 0.6 for the different ACWR calculation methods. This is better than random (i.e. no predictive ability), but a far cry from an acceptable predictive ability, which would be 0.8 or higher. All of this means that, at present, the ACWR is likely able to explain, after the fact, why a player gets injured, but it can’t predict, in the future, who will get injured. In turn, this means that if you were, for example, to remove a player from training when their ACWR score got too high, more often than not you would be removing them from a session in which they would not have gotten injured in. Over the course of a season, this could add up to a lot of missed sessions, and, in turn, a reduction in physical adaptations. Putting some real numbers into this for illustration, utilizing the standard ACWR (where the chronic workload is calculated as average of the previous four weeks), there were 14 true positives (i.e. players with a higher ACWR who subsequently got injured) and 274 false positives (i.e. players with a higher ACWR who subsequently did not get injured). Obviously, this is problematic, and suggests that the use of a single metric—in this case ACWR—to inform training decisions is likely going to be very ineffective. Instead, it is better to use the ACWR as the start of a conversation around training load for a given player at a given time, which in turn is used to make more informed decisions about what to do—as opposed to knee-jerk reactions based on a single number.

What dose of caffeine is optimal for performance?

» Quick summary: Whilst evidence suggests that lower doses of caffeine have the potential to enhance performance, much of the research in this area does not compare these lower doses against the currently considered “optimal” caffeine dose of 3 – 6 mg/kg. This makes it hard to determine just how effective these lower caffeine doses are, which is important when trying to decide what caffeine dose an athlete should use.

If you’re a regular reader of my articles on HMMRMedia, you’ll be aware that I have a special interest in the use of caffeine as a means to enhance performance. In a recent monster article on the topic, based on a recent paper I co-authored, I suggested that whilst we know caffeine is ergogenic, we don’t quite know which dose of caffeine provides the most ergogenic dose. On the surface, this is potentially surprising; around 75% of athletes utilize caffeine around competitions, and it is comfortably the most researched ergogenic aid, so how can we not know which dose is optimal? One reason is that there are varying doses of caffeine used within the research, and so, whilst the International Society of Sports Nutrition note, in their position stand on caffeine and performance, that most ergogenic effects occur with a dose of 3-6 mg/kg of bodyweight, they also note that some research suggests that lower doses of caffeine also supply an ergogenic effect. This is perhaps best summarized by a key review in this area, authored by Lawrence Spriet and published in 2014, which suggested that lower doses of caffeine than this 3-6 mg/kg still enhance performance, especially in endurance exercise. As a result of this research, and others like it, many athletes utilize lower doses of caffeine around competition, whilst others—including myself—are confused as to what the optimal dose of caffeine may be.

» Related content: Read Craig Pickering’s definitive guide to what we do and do not know about caffeine and performance.

Motivated by my confusion, I teamed up with my academic supervisor John Kiely to explore an important question; whilst low doses of caffeine clearly are ergogenic, are they as ergogenic as higher doses of caffeine; that is, whilst we might get a performance benefit from a lower dose of caffeine, is this improvement in performance the same as with a higher caffeine dose? This is obviously important from a performance standpoint, because athletes want to be consuming the dose of caffeine that can improve performance to the greatest extent. Our findings were recently published in the journal Nutrition, and I’ll discuss them briefly here.

The first point is that lower doses of caffeine—defined in our paper as less than 3 mg/kg—are ergogenic; the review by Spriet, along with other studies, make this clear. To determine whether lower doses of caffeine are as ergogenic as higher doses, we have a couple of options. Firstly, we could compare the magnitude of performance improvements between studies utilizing different doses of caffeine. This would be easy enough to do, but it would likely lead to misleading results, because we know that a plethora of variables affect how much caffeine enhances performance for a given individual at a given time, including age, sex, habitual caffeine use, genotype, and beliefs around caffeine. As such, if we give two different people the same relative dose of caffeine, we wouldn’t necessarily expect to see the same performance changes, making comparisons between studies difficult and possibly misleading.

A second option would be to utilize the different caffeine doses within the same study; so compare a low dose of caffeine (say 2 mg/kg) with a caffeine dose more typically found to be ergogenic – i.e. 3-6 mg/kg. Somewhat surprisingly, this rarely happens. In Spriet’s review, only 4 out of the 14 papers actually compared a low dose of caffeine with the currently considered optimal dose. This isn’t a criticism of the original study authors, nor Spriet himself; all were exploring slightly different research questions. However, it does show the difficulty it trying to assess the ergogenic effects of a lower caffeine dose; if it is not compared to the current optimal dose, we can’t be sure whether it offers the same performance benefits.

For those few studies that do compare a lower vs higher caffeine dose (and we found an additional 5 studies published since Spriet’s review that did this), the results are mixed; some show that a dose of 3 mg/kg or less enhances performance as much as a caffeine dose of more than 3 mg/kg, whilst others show a greater performance enhancement from a caffeine dose of 3-6 mg/kg than a dose of <3 mg/kg. From a methodological standpoint, it therefore makes sense that future research should aim to directly compare lower and higher doses of caffeine, to add some clarity to our understanding around the optimal dose of caffeine.
That said, there are times and situations in which lower doses of caffeine may be advantageous. Caffeine has a number of potential side-effects, including an increase in anxiety and disturbances in sleep; both of which may negatively affect sporting performance. In athletes who suffer from these side-effects, lower caffeine doses may provide a happy middle-ground; enough caffeine to optimize performance, whilst not enough to trigger the anxiety or sleep disturbances.

As a summary of our recent paper, we came to the following conclusions:

Hopefully this paper, and some of my others in the area of caffeine, prompt you to consider the caffeine strategies you use with your athletes, and at least make you consider some self-experimentation as a method to optimize the performance enhancement seen following caffeine ingestion.