Every month we take a deep dive into the latest research in sports science. With the World Athletics Championships having just finished, the October Sports Science Monthly look at a plethora of new research on the sport featured recently in Frontiers in Sports and Active Living, ranging from looking at injury data from the sport, pacing, and more.. We then also dive into additional topics like pillars of injury rehabilitation, developing mental toughness, and altitude training. 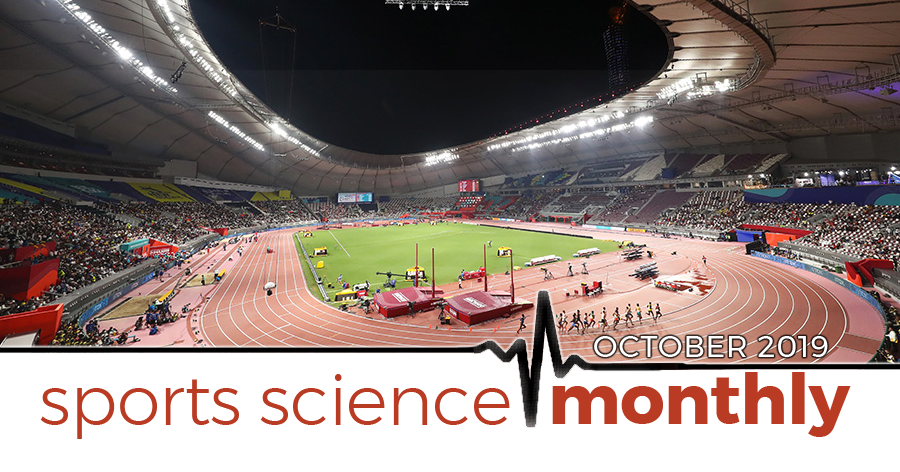 Sports science in track and field

» Quick Summary: A recent journal special issue has focused on the use of various sports science practices in athletics. Key to me are the finding that injuries in youth athletes are very high, and particularly appear to affect the knee, hamstring, and trunk. If you’re the coach of a developing athlete, you should be taking steps to minimize the occurrence of these types of injuries in your athletes where possible.

By the time you read this, the 2019 World Athletics Championships will have just finished. This year’s edition of the biennial event provided some unusual logistical challenges, most particularly with regards to the heat and humidity of the competition venues. Whilst this shouldn’t really affect performance in speed-power events—especially as these events take place in an air-conditioned stadium—the hot and humid conditions have the potential to significantly affect longer duration events, especially those, such as the marathon, which take place outside of the stadium environment. As the 2020 Olympics take place in Tokyo, another city renowned for its hot temperatures, there has been considerable interest from the scientific community around being able to enhance performance in these conditions. Growing out of this increased interest, the journal Frontiers in Sports and Active Living’s sub-section “Elite Sports and Performance Enhancement” recently had a special issue dedicated to research in track and field, which, given the readership of HMMR Media, is worth taking a closer look at.

The lead off article in this special issue is around being able to manage injuries and illnesses during major athletics championships. This is a hugely important area; if you’ve spent a considerable period of time—often years—preparing your athlete for success, you don’t want the wheels to fall off at the last minute. And yet, this is what commonly happens; between 2009 and 2017, athletes at the World Championships suffered illnesses at the rate of 43 per 1000 – that is, 4.3% of athletes at a major championships get ill. Furthermore, almost 40% of athletes suffer an injury of some sort in the month prior to a major championships. As such, limiting the potential influence of both illness and injury on performance is important. This paper contains tips across 10 different areas, although some are—in my opinion—more important than others. Given the open access nature of the paper, it is best for you to read the tips directly – they will allow you to better prepare your athletes for any major championships this might attend. This is crucial for National Governing Body, because other research published in this issue demonstrates a relationship between fewer injuries and illness and greater success. So, if you want to be successful at a major championships, do what you can to protect your athletes from injury and illness.

A further study published in this special issue explored the difference in pacing strategies utilized at both the World Championships and Olympic Games in endurance events. To do this, the authors collected electronic split data for 275 male and 232 female performances from 2013 to 2017 in the 800m, 1500m, 5000m, 10000m, marathon, and race walks. The athletes were then placed into groups; top-8, top-12, top-15 [depending on the race distance; 800m only has 8 in the final, 1500m has 12, and all others much larger numbers], and rest of the race, and their mean speed during each split was calculated.

Pacing is obviously important, because it is the method by which athletes manage the metabolic cost of their event. By investing too much metabolic energy early in the event, their performance will be harmed later on; conversely, by aiming to save their energy for the latter parts of the race, the athlete runs the risk of either losing too much ground early on, or not expending as much energy as they potentially could have, leaving some “gas in the tank”. Alongside this, the athlete’s own physiology and biomechanics can constrain the amount of energy available for use across the race, in turn influencing performance.

Some of the results make for interesting reading. The 800m was the only event with a consistently slower second half of the race; negative splits (where the second half of the race is covered quicker than the first half) were uncommon in this event, whilst, in the 1500m, all athletes had negative splits. The general trend across all the endurance events were that the better athletes had an ability to maintain high speeds throughout the race, and increase their speed to a greater extent at the end of the race. In comparison, athletes with a lower finishing position could maintain the early pace, but then either slowed down, or could not accelerate as much towards the end of the race as the medalists. In the 800m, the point at which the medalists tended to separate from the pack was at around 600m, but in longer events this separation happened much earlier – suggesting that the race can be won or lost early on.

This can have implications for the development of specific training sessions. In the 800m, this suggests that the better athletes are able to run a fast first lap (requiring decent 400m speed), and then can better “hang on” during the second lap. This can be trained through sessions where the athlete has to run, say, 600m, with a target 400m time being achieved. For longer events, the better athletes are able to start faster, and then maintain their speed for far longer; again, this can be modeled in training by requiring a faster 800m initial spurt, followed by a maintenance phase. In keeping with my recent article on utilizing data to design more realistic training scenarios, this paper adds to our knowledge of what “realistic” is in terms of endurance events.

A final important paper explored the prevalence of injuries and illnesses in a cohort of elite Irish under-20 track and field athletes. This paper is particularly interesting to me because I typically see a lot of high-level senior athletes with on-going, long-term injuries that require constant management, and that, in some cases, are becoming significantly performance limiting. This happened to me during my career; I suffered from my first back injury when I was 14, and this injury type required on-going management during my career. During my best ever season, the injury severely limited my performance at the World Championships (where I believe I should have made the final), and, four years later, resulted in me getting to the point of not being able to utilize Olympic lifts or any axially loaded squat variations. In addition, one of leading causes of dropout and burnout in youth athletes are niggling injuries, and so being able to better understand—and then reduce—their prevalence holds strong performance-enhancing potential. In this study, the authors recruited a cohort of elite Irish junior athletes to complete a weekly web-based questionnaire around their health for thirty weeks. Seventy athletes in total gave their consent to take part in the study.

The average weekly response rate to the questionnaires was fairly good, coming in at ~72%. 87% of the athletes reported at least one health problem over the thirty-week study period; 44% reported at least one acute injury, and 53% at least one overuse injury. Female athletes were more likely to report a health problem or illness than male athletes, but there were no differences in injury rates between the sexes. Athletes in explosive events were significantly more likely to report a health problem. Of the athletes reporting an illness, the most common type was an upper respiratory tract infection, which made up almost 75% of all illnesses, typically leading to a loss of one week’s training or competition time.

In terms of acute injuries, 47 were reported in total, from 31 different athletes. Most (58%) reported only one injury, with around a third of injured athletes being injured twice, and a small number being injured three (3%) and four (3%) times. Athletes in the explosive event groups were significantly more likely to report an injury than those in the endurance events. Most injuries affected the trunk (19%), hamstring (17%) or knee (17%), and typically resulted in a one-week absence from the sport.

For chronic overuse injuries, 70 were reported in total, across 37 athletes. Again, most reported only one (49%) or two (30%) overuse injuries, although a not insignificant minority reported three (5%) and four (16%) such injuries. Endurance athletes were more likely to report an injury compared to explosive event group athletes, and most overuse injuries occurred in the hamstring (25%), calf (16%), or foot (14%). In general, these injuries resulted in around 1 week of missed training and/or competition.

All of this demonstrates that injuries are pretty common in elite junior athletes, with almost 90% of athletes in this cohort reporting an issue over the course of a season. Furthermore, in an average week, almost 33% of this cohort reported a health issue. The most commonly reported health issues were overuse injuries, which is consistent with other studies in this area. This suggests that a mismatch between training load and recovery is potentially driving this increased injury risk, but it’s also important to acknowledge the trade-off between the need for an increased training load to drive performance improvements, and a need to guard against injuries and illnesses. Additionally, being able to identify the key, common areas of injury in these developing athletes can drive educational sessions; in this case, the common sites of injury were the trunk, hamstring and knee. As such, injury prevention information should be focused on these three areas, and, additionally, around the balancing of training load and recovery to guard against the accumulation of overuse injuries. Knowing how and why injuries occur in promising youth athletes can hopefully assist in enhancing their availability to train and compete, reducing the risk of burnout and underperformance, and allowing them to maximize their potential.

Other papers in this issue—all free to access—include an examination of the effect of lane order on 800m races at major championships (the outside two lanes are the worst); developing pacing behaviors in younger athletes; the ability of racewalking judges to note a foul; the relationship between pole vault biomechanics, training load, and injury; running velocity and mechanical asymmetry; deep trunk muscle thickness and sprint performance; and block centre of pressure and sprint start performance.