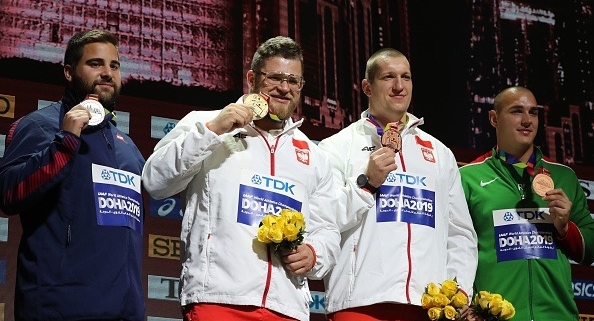 It was a bit of a strange year in the hammer throw. For the first time ever, the World Championships took place in October. Also, for the first time ever, there were four medal winners. In the end, some of the top established throwers continued to add to their credentials. But it was also a year for new names, as five of our top ten athletes were unranked last year. Our complete annual rankings for the men’s hammer are below.

Just one disclaimer before we begin: the rankings are a subjective evaluation of who had the best season in 2019. In coming to the final rankings I look at following factors, listed in their order of importance: performance at major championships and competitions, head-to-head performances against competitors, consistency; and season’s best. In short, performing when it counts is the best judge that you are better than another thrower. Also check back this later this week for the women’s rankings.

After dropping down to second place last year, Fajdek returns to the top position this year. Fajdek won his fourth consecutive world championship in the hammer this year, and also his fourth top ranking over the last five years.

It actually wasn’t necessarily a strong year for Fajdek. His season’s best was the lowest it has been since 2011. But he was consistent. He opened the season over 80 meters in May, and then won 10 of 13 competitions. He placed no lower than second at any competition. And while we anticipated a close world championships, he dominated from round one and won by more than two meters.

Nowicki had a strong start to the season, posting a world lead in June that held up through the end of the year. During June and July he averaged nearly 80 meters in his competitions. From August to the end of the season, however, his results dropped off more than two meters on average. He struggled at the World Championships as well, initially placing just fourth before being upgraded to share the bronze after a protest. Nowicki was the only person able to defect Fajdek this year, doing so three times. However he also lost eight times to his countryman, which gave Fajdek the clear edge for first place.

Still just 22 years old, Halasz picked up another global medal with a bronze at the World Championships. He competed more than anyone else in the rankings and over 24 competitions he only missed the podium once.

Bigot narrowly missed a medal at the World Championships two years ago. That earned him a debut at fourth place in the rankings, before dropping off again last year. This year, he performed even better at the World Championships. A season’s best gave him silver He had many great results throughout the season and was close to a higher spot on the rankings. However, while he stepped up when it mattered most, he still lost the majority of his competitions against his closest competitors: 3 of 4 against Halasz and 6 of 7 against Nowicki.

After making his rankings debut last year, Henriksen made sure no one knew that was a fluke this year. He added more than a meter to his national record and recorded his highest ever finish at the World Championships.

We have had high expectations for Cienfuegos ever since he broke the world junior record in 2009. Ten years later, his time has started to arrive on the senior stage. He already set several national records in 2012 and 2013, but his results stalled after that. That changed in March when he threw the first of four national records this year. His hot streak continued until September when he nearly broke 80 meters for the first time. His World Athletics ranking was hurt since he was not able to get into many Hammer Challenge competitions, but he competed an astonishing 23 times this year, 7 of which were over his old record and 10 over 76 meters. He also recorded his first ever worlds final performance.

Spots 5 to 7 were the closest positions on the World Athletics Rankings, with just 16 points separating the 3 athletes using their formula. This spot was also our closest call of the year as well. Overall Miller’s best was down from last year, but he held his form much better despite the long season with several strong showings on the circuit. But Miller still struggled in two of the biggest competitions of the year: finishing 10th and missing the final cut at the World Championships, and throwing just 66 meters at the European Team Championships. Those were also two meets where Cienfuegos stepped up and beat him to earn the slight edge for sixth place.

The 18 year old makes his first appearance on the rankings after a strong end to the season. In July at the European Junior Championships he broke the European Junior record with a throw of 84.73 meters using the lighter 6-kilogram junior implement. He then switched his focus to the senior ranks, and hit a new personal best to place 5th at the World Championships in October. He didn’t have the chance to compete as much against the top tier of competition, but these accomplishments alone helped secure him eight position.

Dudarau had some ups and downs this year, but what matters most at this part of the rankings is how you perform at the big meets. Dudarau finished 8th at the World Championships, which helped him on his way to his highest ever world rankings.

It was a close call for the final spot. Ashraf Amgad El Seify (QAT) was higher at the World Championships but only competed a half dozen times throughout the year. Yevgeniy Korotovskiy (RUS) was also in the Doha final and close behind. The IAAF rankings had Sean Donnelly (USA) in 10th position, but he didn’t even qualify for Doha. In the end we our decision also came down to Donnelly and Winkler. Donnelly actually took 4 of 6 competitions against Winkler, but Winkler was on top when it mattered most: the US Championships, Europe vs. the World, and the World Championships. He even threw a personal best in Doha qualifying to make the finals. With that he joins Kibwé Johnson as just the second American to earn a ranking this decade.