If young people coming into your environment are inefficient or incompetent movers, how can you help them? Movement has become a catch-all esoteric phrase. Because it is a vast topic, it can be intimidating. It can also be the refuge of the rogue or charlatan peddling myths. Where do you start?

One of the tenets of coaching is to work from general to specific. More than 50 years ago Ruth Morison wrote in her landmark book A Movement Approach to Educational Gymnastics that “To be physically literate one should be creative, imaginative and clear in expressive movement, competent and efficient in utilitarian movement, and inventive, versatile and skillful in objective movement.”

Despite this, many coaches lack the background to coach movement generally, and focus directly on the sport specific skill instead. Having done coaching qualifications with four different National Governing Bodies (volleyball, weightlifting, athletics and gymnastics), I have yet to see anything other than sport specific skill being taught in coach education courses. The only movement requirement for my Master’s degree in Sports Coaching was to get between classroom and canteen.

In this article I shall outline the framework I use to develop physically literate children, and how it can be used by coaches from all sports to teach movement.

The origins of Laban’s movement framework

One pioneer of movement education was Rudolf Laban, a Hungarian dance teacher, who was based in the UK until his death in 1958. He created the framework to help structure his dance classes. He also worked in industry to help improve their ‘functional movement.’ The timing of his arrival and schooling coincided with the move in physical education from concentrating on the group (e.g. pre-WWII Swedish-style gymnastics) to the focus on the individual learner expressing themselves. 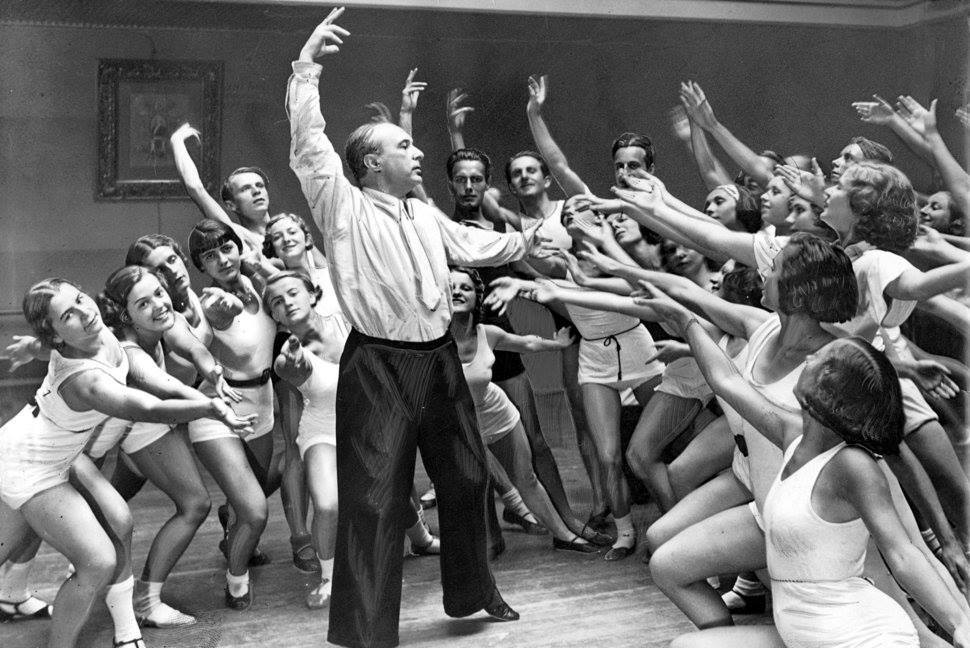 Educators like Morrison, Lisa Ullmann, and American Bette Logsdon, picked up the framework and applied it to physical education, which, in the late 1960s, was floundering in a semantic swamp.

Laban’s framework gave educators and students a common language from which to work. It was then adopted by the UK education boards and distributed with some success. However, it was more universally accepted with teachers of young children and girls, than boys, as detailed in John Foster’s book The Influences of Rudolf Laban. This was in no small part due to the influence of ex-military men teaching boys physical education. The use of indoor apparatus to replicate obstacle courses and a ‘command-response’ approach was what they were used to.

The implementation of Laban’s framework required a different set of coaching skills: questioning, observation, guided discovery and differentiating tasks for each level of pupil. In the hands of trained teachers it works well and is rich in depth.

Rather than taking a specific skill and reverse engineering it into linear progressions, the framework starts with each individual and gives them the opportunity to discover the many ways they can move. As Morrison wrote, sports have an “unchangeable end-product and are bound by definite rules.” If we try to teach movement through sport, we are severely limiting the potential that children can achieve. Focusing on the individual takes longer to get to a single outcome, but it gives a broader base of movement that may allow quicker progress once additional skills are introduced.

To start with, Laban divided movement into 4 aspects:

The teacher can then devise the class around these four aspects, which are further analyzed below: 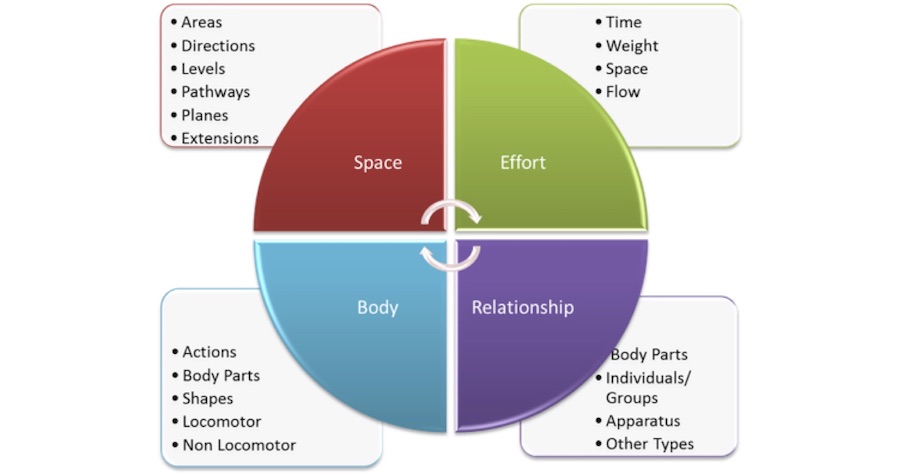 Effort –How the body moves is divided into:

Space – What area is the body working in, which direction does it move, what pathways does it follow, curved or linear or zig zag, change of levels-low, medium, high.

The relationships aspect was adapted to the gymnastics and games worlds. If dance is about expressing emotion, then gymnastics is about solving problems. That involves going over, around and under people and things.

If the outcome of your program is measured by the competency of a single task, or set of tasks, then some people will grade higher than others. There is usually a time frame involved in this, so in the school environment, the teacher might be assessed by how many of their pupils can do a forward roll after a term of gymnastics, or how many children can throw a basketball into a hoop successfully.

The sports coach may be looking to field their team for the season, so needs every player to be able to know their position and work collaboratively as a unit beforehand. This works for a limited number of people who are ready in that time frame to perform those skills.

But, it also leaves a lot of people defined as less competent. What happens to them? With this method, physically unsure people are constantly having their incompetence shown to them.

Instead, I start every session by observing what the children do, and what they don’t do in free practice. How do they explore? Which direction do they move, do they favor left or right, do they like slow, strong exercises, or do they spring around and jump?

For example, the boys often do curling moves forward: a forward roll or a somersault. Girls may do this, but very often curl backwards into a bridge or walkover.

By observing this, I can then plan into the session specific cues that help them either develop the skill they are exploring, or to increase their repertoire of movement. This could also be done with different cues:

Not everyone, at every stage of learning, benefits from open ended guided discovery or explorations. Sometimes there is a need for more direct cues or a series of progressions. Teenagers and some adults are more inhibited about ‘having a go’ and often enjoy being given specific tasks.

This is especially important with safety points, and I would say ‘You must keep your hands on the floor in a headstand,’ and show them the triangle base of support with head and hands. This is the simplest option for beginners.

Then I add variety and challenges in many different forms of headstand, leading into it and out of it, leg shapes, speed and flow.

To get an idea of how different teaching methods look in practice, I’d like to share a few case studies. We can start with guided discovery.

Guided discovery is about the process. Rather than looking at the outcome, the teacher looks at the process and teaches this. For example, rather than teaching the forward roll (specific outcome) the teacher uses cues like “perform a rocking or rolling action in a tucked shape going forwards or in place.”

In the first video you can see me giving guidelines and tasks that the boys can then experiment with, alongside some specific cues. This leads to several different successful variations:

In the second video you can see me being taught a specific skill with only one successful outcome:

The question coaches have to ask themselves is: is it necessary to be able to perform one specific skill, such as the forward roll? At some stage, yes, and if you want to be able to do a forward somersault, then yes again. But, if your definition of success is this one skill, then there is a good chance that many of your athletes will be unable to do it within the time given on the syllabus.

If all your athletes can rock and curl and do a roll of some type, then link that into other moves, you are more likely to build their confidence as well as increase their repertoire of movement that applies to many other situations, other than just gymnastics.

Unfortunately, there is a prevalence of awards for young people that require them to be able to perform a specific set of tasks. This is a very narrow, linear syllabus and assumes that everyone develops every skill at the same rate.

We don’t do those awards at our club.

Before attempting to teach the javelin throw, the athlete needs to be able to throw and they need to be able to coordinate their whole body movement. Otherwise you see the ‘darts’ throwing action. This can be developed through many different ways, including learning from throwing stones into a river, or being guided to practice a series of movements that create diagonal patterns for the hands such as:

The first is trial and error and play; the second is a movement sequence where children operate within a framework of coaching cues. Both have their uses, and if the children experience both, then when it comes to coaching the javelin you are dealing with someone who can launch an implement with a contralateral leg/arm action and doesn’t fall over.

The diagonal patterns are using 3 of Laban’s aspects of movement: the body (hands), relationships (how the hands get to the feet or knees), and space (direction is given, creating a diagonal pathway).

The coach can then develop this pattern using different aspects of the framework, singly or in combinations:

By having a shared framework, coach and athletes can learn together and create shorthand to help communication. The athletes develop an ‘inner feeling’ of how they move, rather than having to listen and respond to endless external cues.

I am constantly surprised and delighted at the infinite variety of movement patterns that our athletes can create. This framework has allowed me to structure the lessons and improve my coaching cues so that we develop competent and creative movers. If you teach people to move well, you won’t have to tell them to move often.