Every month we take a deep dive into the latest research in sports science. This month we start off by looking at some of the key success factors behind Caribbean sprint supremacy. Then we learn advice from top researchers, a look at systems thinking, and much more. 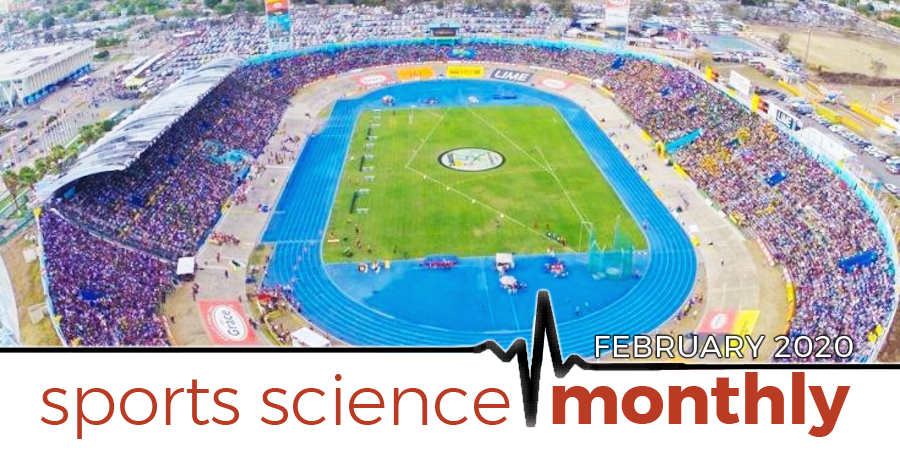 Behind the success of Caribbean sprinters

Over the last 15 years, the Caribbean nations have moved to the forefront of global sprint performance. Primarily spearheaded by the Jamaican sprint dominance from around 2005-2016, athletes from this region has won a significant proportion of sprint medals at the global major championships since 2004. A recent paper, published in the Journal of Sports Science and Medicine, attempted to explore some of the factors which contribute towards the development of these world class athletes. In turn, these factors—if identified—might have some important implications for how we develop our own athletes. Here, the authors recruited sixteen world class athletes from six different English-speaking countries within the Caribbean, and utilized semi-structured interviews to determine some of the key developmental themes. All athletes were, at the time of the study, still currently competing at a world class level. All had competed at least once at either an Olympic Games or World Championships, and had an average age of 29 years. The majority (13) of the athletes were sprinters or hurdlers; one was a jumper, and two were throwers. On average, the athletes had been competing internationally for 14 years, and had 7 Olympic and 15 World Championship medals between them.

From the interviews, three clear themes developed, which I’ll explore below:

Key Theme 1 – Conducive sporting environments. The first key theme was comprised of two sub-themes; the mode of training, and the mode of competing. The athletes’ initial exposure to training was typically built around playing for fun; the athletes’ played multiple sports in their childhood and developmental years, often with little or no structure or pressure win. This developmental stage was not seen as training, but more so as playing. However, as the athletes’ aged, there was a gradual shift towards a more structured, serious mode of training. This represented the first key transition point, with some athletes noting that they struggled to adjust to this different emphasis. Overall, these findings mirror what is generally considered best practice; athletes avoiding early specialization in favour of wide sampling, with an emphasis on fun and enjoyment, before becoming more specialized—and therefore serious—later on.

In terms of competition structure, there was a general transition from “fun and games” to “compete to win” to “international competition.” The first stage is similar to that of training; fun activities in a semi-structured manner, often built around school activities such as a sports day. As the athletes grew older, this then shifted to competing to win, which again represented a transitional challenge; many athletes reported initially struggling with this increased competitive nature of sport. The strong competition structure within Jamaica, illustrated by “Champs”—the high school competition that often attracts sell-out crowds—is an example of how a highly competitive competition structure is likely to underpin optimal athlete development. Finally, as the athletes transitioned into the senior age group, there was a graduated exposure to international competition, which was viewed as an “eye opener”, making the athletes aware of what was required on the international stage in order to be successful.

Key Theme 2 – Functional social support network. This key theme has three sub-themes; family influence, coach influence, and peer motivation. In general, the families of the athletes were highly involved in the athletes’ career; introducing the athletes to athletics, and supporting them during their athlete journey. This support obviously included financial and administrative support—including transporting the athlete to and from training—as well as providing emotional support. This support wasn’t necessarily just from the parents of the athletes’, but widened to include their grandparents, aunts, and uncles. In addition, the coach—unsurprisingly—had a very strong influence on the athlete during their development. This influence grew as the athletes’ aged, and eventually overtook the athletes’ families as the main source of social support. The coaches were generally seen as being mentors or advisors, with a coach-athlete relationship emerging that was based on trust and communication. Finally, an athletes’ peers—teammates, competitors, and partners—were also important. Being pushed in competition by similarly able and motivated peers was seen as being hugely important in driving development.

Key Theme 3 – Organizational input. This theme relates to the support of key organizations in assisting the athletes in their development. Part of this revolved around talent identification and recruitment, which was generally done by schoolteachers or early coaches, and based around perceived potential. This was unstructured in nature, and generally relied on the “coaches’ eye”. After this stage, the key organizational support aspect related to governmental or sports federation funding, scholarships and sponsorships. These aspects appeared to be most important in assisting the athletes in their transition from promising youth athlete to international competitor, and then becoming established at that level.

These themes suggest that:

Overall, I really liked this article, as it demonstrated some of the factors that underpinned the development of elite Caribbean track and field athletes, and provided some useful thought points for coaches and parents to consider when developing their promising youngsters.

Building on this article, a second paper, this time published in PLoS One, explored the factors potentially underpinning success in Jamaican track and field athletes. Here, the authors explored data from 1552 athletes, male and female, who achieved a top-8 finish at the “Champs” the Jamaican high-schools championships, between 2000 and 2017. At the time of competition, the athletes were aged 18-19 years old, and there was a fairly equal spread amongst sprints and hurdles (44%), endurance (21%), and field events (36%). The researchers then determined the progression of these athletes to compete at the Commonwealth Games, the World Championships, or the Olympic Games. Athletes who did not make this progression were classified as “did not progress.” Data around the relative age effect—i.e. the birth quartile for the athlete within a given year—was also collected, as was their place of early development.

The results suggest that around 19% of athletes who achieved a top-8 finish at “Champs” progressed to senior national competition, with a slight skew towards males (10.2%) above females (8.8%). This number was even lower (3.4% of males and 3.1% of females) making the progression to senior international competition. For athletes who progressed to senior competition, there was a clear relative age effect, with athletes born in the first quarter of the athletic year far more likely than those in the final quarter to make the transition. Finally, junior athletes from a region with a population between 5,000 and 30,000 were about two times more likely to compete internationally for Jamaica.

What does all this mean? Firstly, very few athletes stay in the sport (in Jamaica at least) following their junior career, and fewer athletes still make the transition to international competition. It appears that there is an advantage to being relatively older in a given athletic year. The relative age effect is often believed to disappear as athletic level increases, but this study suggests it might not. The relative age effect exits as athletes who are relatively older tend to exhibit greater levels of physical and psychological maturity in their youth compared to their peers. This means they tend to have increased early success compared to their peers, and are therefore offered more support and encouragement, which perpetuates the effect. A number of different solutions have been proposed—which I won’t detail at length here—but essentially, as a coach, it’s important to understand that success at the youth level is often strongly linked to level of development, and this early success (or failure) should not blind you to the long-term potential of a given athlete. Further food for thought indeed.