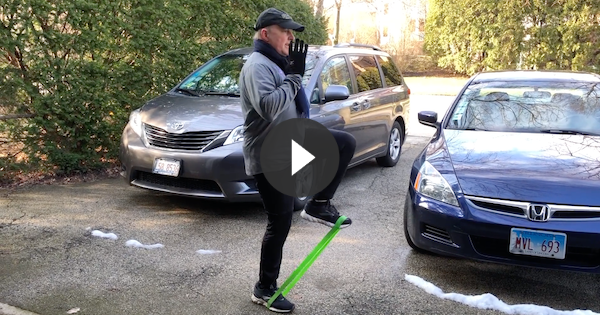 What is one simple, cheap and versatile fitness tool every athlete should have? Lets start with Mini-Bands. Mini-Bands for those who don’t know can be found typically in yellow, green, blue and black colors. The colors are related to their resistance. Yellow is the lightest resistance and black is the heaviest resistance. I believe every athlete you should have a set of green and blue bands as those seem to be the colors that seem most versatile for exercises. A yellow band might be good for learning some of the more challenging exercises.

I originally learned about Mini-Band routines from Coach Vern Gambetta. The first part of today’s film is me going through Coach Gambetta’s Mini Band routine that has been an element of warm-ups I coach for almost 20 years.

However, the person who has taken Coach Gambetta’s mini-band influence and now does more with Mini-Bands than anyone I know in the world is Coach Steve Myrland. In fact he is known to some of us as the “Miles Davis of Mini-Bands!” Steve — a Wisconsin Badger — lives in the Madison Wisconsin area and has for years led an incredibly successful morning community fitness program that is attended by everyone from former Olympians to the local postman. It’s a lot more than just mini-band work. But the community fitness group is his where he takes the fundamentals of movement and then improvises and riffs to make a daily workout into literally a work of art.

Steve is also the King of the Transverse plane — probably the most under trained movement plane we coach. All rotational movements happen in the transverse plane. But when have you seen a strength coach ever discuss that plane and how to improve your strength power and grace in the transverse? Well Steve does and the people who attend his workouts are better and healthier for it. I only have 6 of probably well over 20 Mini-Band exercises Steve Myrland has created. Try them out and let me know how you like them.