As it is Sunday, I will take a break from posting workout information. Don’t worry; more to come tomorrow! Instead today, I would like to share some inspiration from the great coach Al Carius that I think is applicable to our current plight. He has been men’s Cross Country and Track and Field Coach at North Central College in Naperville, Illinois for 52 years and has an incredible record of success. 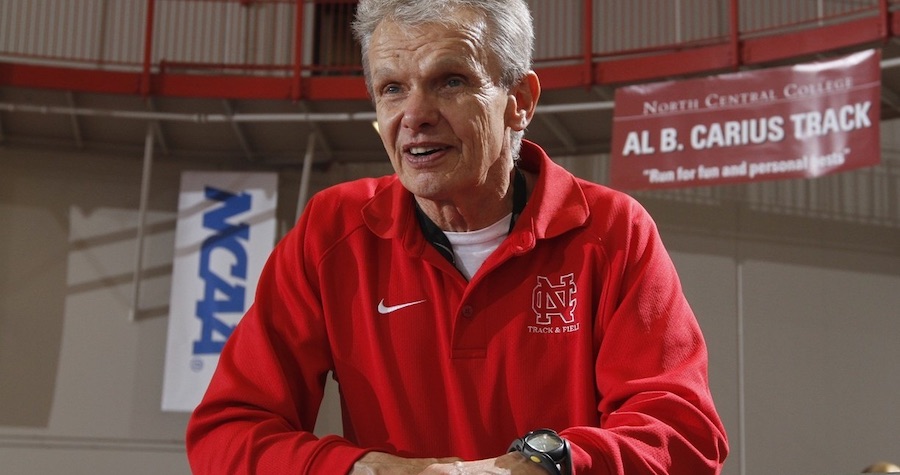 The only time I have met Coach Carius was in the Newport News, Virginia airport in late November 1983. I was sitting in the airport on a Sunday morning with my teammates from the Franklin and Marshall College Cross Country team. The day before we had competed in the NCAA D3 National Championship Cross Country Meet, and we had not run well. I wrote about my lessons from that race in one of my early blogposts: Run Your Race. I was taking inventory that morning while waiting for our flight and in walks Coach Carius with the men’s national champion from the day before:North Central College athlete Tony Buell.

I don’t know if it was our coach or a teammate or me, but we all walked over to congratulate Tony and wish him well. In those days the winner of the D3 Cross Country race would fly on Sunday to the D1 national championship race which that year was near us in Bethlehem Pennsylvania on Monday. So Tony was on the same flight. Coach Carius though was the figure I remember most from that brief encounter. The positive energy that emanated from him was amazing.

Since moving to Illinois in 1994, I have heard Coach Carius speak a couple times, and I have met lots of men he has coached. There are few coaches anywhere who have had the record Coach Carius has had. Its truly incredible what he has done at a small college in the western suburbs – his teams have won 19 NCAA Championships and been runner-up 15 other times in cross country alone. But his greatest legacy may be that he literally has created the greatest coaching tree of any coach in any sport I know. They are scattered around the nation at small schools and large from middle school through university programs and they all share his enthusiasm for sports and personal growth.

Here is a quote they I especially like from Coach Carius and I think is applicable to our current dilemma.

“Whenever I am at a coaching clinic I am amazed at the seemingly overwhelming flow of new ideas about distance running; a sport that I always thought was very simple. What I am suggesting is that we in too many case are over complicating the sport of running, and also other sports, drawing away the simplicity, fun, and true meaning behind “playing” sports. Intriguing to me is that we have about as many outside influences and opinions on distance running in the the United States as we do coaches. The Kenyans knew the key, Ron Clark found the path, Craig Virgin lived it, Glenn Behnke figured out the way, and my mentor Ted Hayden explained it best — ‘its not that complicated. If you have someone who is motivated, you can do just about anything in a workout and he (she) will get better, and if you have someone who is not motivated, you can do almost anything in a workout and he (she) will not get better.’ Keep it simple. I feel that the simplicity of our sport is eroding when I speak with young coaches and they bemoan the fact that so many young athletes are inundated with hyper-technical training methods from the internet and other external sources. It is frustrating because I feel what is most important is the relationship between the coach and the athlete and the trust in each other that is developed through that relationship. I believe that its it the coach’s responsibility to help the athlete find purpose and satisfaction within the experience which leads to self-mastery and a lifestyle guided by internal values.”

As I have communicated with our athletes over the last couple of days, my major message is Coach Carius’s message. Whatever you do keep it simple and keep it fun. You do not have to do anything special right now. Avoid the grind!

If you want to learn more about Coach Al Carius watch this tribute that North Central made about him and his contributions to so many.