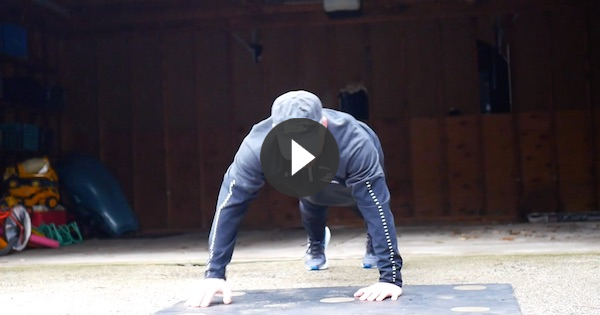 I have a long love affair with the push-up. But the poor push-up I worry takes unearned abuse and neglect. So today I want you to know about why it’s an awesome exercise to do and how you can make it better than you thought. Here is how my push up love affair started and then progressed.

In 1975 when I was in 8th grade my family moved from Portland, Oregon to Baltimore, Maryland. It was a tough move. My mom who is 93 now still reminds my dad 45 years later. But I also left public schooling and entered a private school – a Quaker School in Baltimore called Baltimore Friends School. For the first time ever, I had to wear a PE uniform and change in a locker room and a young man in my class named Lance would change his shirt and all us 8th grade boys would ask, how did he get to look so good! He would tell us that he did 100 push-ups in the morning and 100 push-ups in the evening.

Sharing a locker room story from Middle School may seem a little odd except that Lance grew up to be a TV and Film star Lance Reddick (to me his most famous role is as Lt. Daniels in the Wire but there’s a lot more) and you can google Lance Reddick shirtless and still in his mid to late 50’s he looks great! I want you to know as well Lance was a wonderful classmate and obviously is an exceptionally talented actor and musician. But my interactions with him in 8th grade was my first inkling that the push-up had more power than the average exercise.

I also share this story in part because I have always wondered why boys are more interested in bench pressing and dumbbell curls than push-ups. I can assure you if you are lifting in part for vanity – which a lot these young men seem to be — save your time and start push-ups.

But this blog is mostly about performance so my love affair with the push-up goes well beyond vanity. I started participating in track and field during my junior year in high school and my first track and field coach recommended to our team that we each do 50 push-ups in the morning and 50 push-ups in the evening. At that time the most push-ups I could do at one time was between 25 and 30. So it took a few weeks but I eventually got my daily morning and evening push-up total to 50 each time. Then I noticed my running performance improving more dramatically.

However, at that time in my life, I did not do the math that the push-up complimented my running performance so well. After that season I was also much more inconsistent in doing push-ups.

It took a friend of mine on my college track and field team to make me think about push-ups more seriously. In our freshman year, he had pledged a fraternity and at that time part of the pledge weeks were a lot of push-ups (this would probably be considered hazing today). The peak numbers of push-ups a day my teammate was made to do was during the last week towards brotherhood at this fraternity – known as hell week — and all of a sudden something interesting happened. He was definitely tired but also his running performance started taking a jump up.

A week or so after the pledge period ended, and he had had time to recover, he ran a 5k in 14:34. That was over a 30 second improvement. In fact he set a personal best for 2 miles on the way to this 5k Personal Best. And he never ran faster for 5K again. Was that because he never did as many push-ups again in his life. Coincidence? I don’t know.

The most consistent I was ever with my push-ups was during November, December of 1982 and January and February of 1983 – midway through my sophomore year in college. I returned from my holiday break and in late January ran a personal best for 2 miles at an indoor meet at Lafayette College to start my track season. I have never started a season before with a personal best!

Then two weeks later in early February I ran what I still think might’ve been the race of my life at Swarthmore College. On few race days have I ever felt better and I led from almost the first step. When we got to the mile mark, I was at 4:36 with a Haverford College runner Joe Schwartz on my tail. Joe usually beat me, but there were times when I would beat him and on this day I did. Unfortunately, though, race officials stopped us a lap short in this 3000m race. Anyway, Joe was gracious and congratulated me on a great race and said I must’ve set a world record for this odd distance that we ran. Joe went on to have the best season of his life. And I came down with an upper respiratory infection that set me back weeks as I had to stop training and doing push-ups.

When I became a coach, this Swarthmore race was an example though of the many races when I felt great compared to the races when I did not. I cannot think of a personal best that I set other than very early in my running life that was not during a time when I was consistently doing push-ups. So now I talk about push-ups a lot and try to share with the athletes I coach how important I think they are.

One thing I think that I misunderstood as an athlete and today’s athletes also misunderstand is how effective push-ups are as a core exercise. Why runners will do endless planks but not push-ups I will never understand. I have done them both and in my opinion push-ups are far superior for your core (and less time consuming) than planks.

If none of my stories have convinced you yet that the push-up is an essential exercise. Please read this article from the Washington Post on what actually can help you live to a ripe old age — it’s the push-up. Middle aged men who can crank out 40 push-ups have a much better life expectancy apparently.

So there’s vanity, there’s performance and now there’s long life — what else do you need to convince you to do more push-ups!

As I have developed as a coach I have also begun to appreciate the push-up variation. Obviously we all know what regular push-ups are like. But there are many push-up variations which I think make doing push-ups more effective and even more interesting.

Here are two videos for today. The first is me doing a Push-up circuit I learned from Vern Gambetta and the second is Tracy Fober’s Med Ball Push-up circuit. Both are worth adding to your current pandemic fitness plan. They are simple, require little or no equipment and can be done anywhere.

I hope you too can develop a similar love affair with the simple push-up.